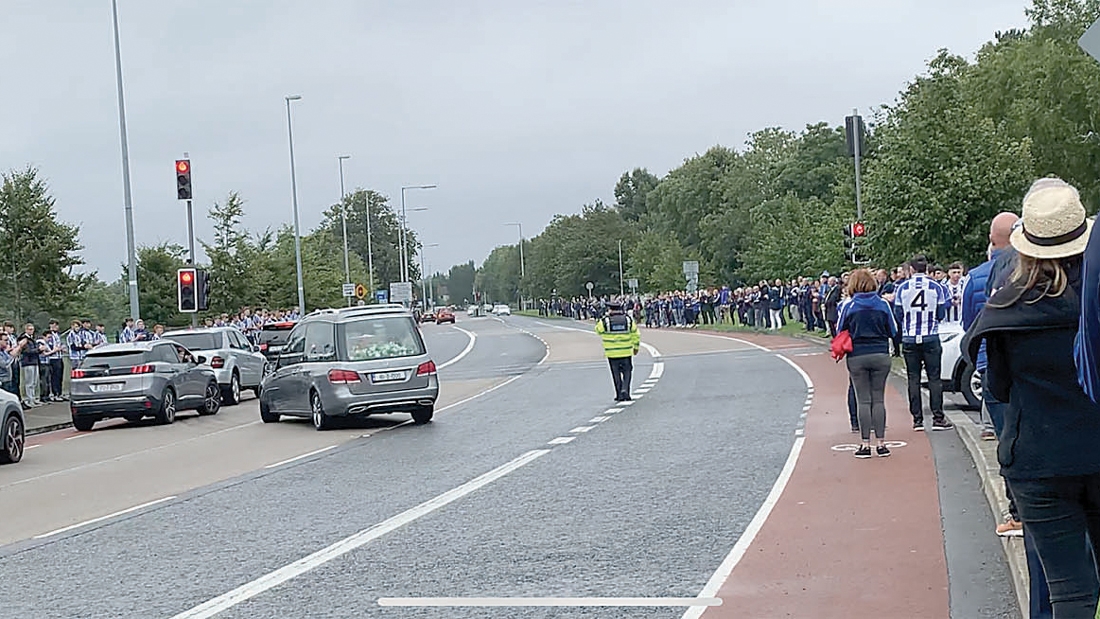 BALLYBODEN St Enda’s are mourning the loss of club stalwart Brendan Moran, who died on Sunday at the age of 73.

Raised in Drimnagh, Brendan lived in Rathfarnham for much of his adult life and has been remembered as a “magnificent club man” for his many years of dedication to Ballyboden St Enda’s GAA Club.

Upon his election as chairperson in 2013, Brendan remarked it to be the highlight of his sporting career.

As a mark of respect, members from the club formed a guard of honour from The Blue Haven down to the clubhouse on Firhouse Road as the funeral cortege passed by on Wednesday morning.

Brendan died on Sunday in Our Lady’s Hospice after being diagnosed with a series of different health complications this year.

“He was always welcoming, he made an extra effort to make you feel welcome in the club,” he says.

“He had a great attention to detail and humility about him, even after being elected chairman in 2013 he was out painting the pillars at the pitch afterwards.

“We got the carpark retarmacked over the lockdown, about two-weeks-ago he got a lift down to the club to see it and I got a text off him saying how proud he was to be from Ballyboden.

“That was him, a proud man and a real man of integrity… and he had a great sense of humour as well.

Brother of former Manchester United player and Dublin All-Ireland winner Kevin Moran, Brendan was involved in coaching teams before serving as chairman of the coaching committee.

During that time he worked with Brian O’Regan and Paul McLoughlin to ensure a coaching plan be implemented to give players the best-possible experience of developing.

It was under his term in office as chairman of the club that the Senior Men’s Footballers were crowned Leinster and All-Ireland Champions for the first time in their history in 2015-16.

Brendan was known for how meticulous he was in preparation, with his attention to detail paying dividends with the teams he was involved in.

During his tenure with the Senior ‘B’ hurlers, he had a motto that inspired the team to the Adult Hurling League Three title in 2019.

“He used to say to us ‘no chase is ever wasted’,” says Fionn Maguire, who was captain of the side last year.

“Which is a good motto on the pitch but is also something that you can take into life with you.

“Hopefully we can carry that into competition with us this year.”

After beating Parnell’s in the final game of the league season last August, Ballyboden were presented with the trophy and as Fionn recounts, Brendan wanted everyone to feel the joy.

“During the game James Enright was injured, his ear was split and the ambulance came and everything,” recounts the then captain.

“He was taken away to the hospital and we were presented with the cup out in Parnell’s.

“The first thing that Brendan did was grab the cup, get in the car and he bursts into Beaumont Hospital.

“A nurse was there and she stops him and tells him that he’s going to have to wait because they were still looking at James, so he says ‘ohh okay that’s no problem’.

“The second she turned her back, he was straight into him to get a picture with the cup, blood everywhere.

“But that’s Brendan, it wasn’t his cup, it wasn’t an individual’s cup, is was for everyone.

“That was just the mark of the man.

“Even before we had him, he was ever-present in the club.

“He was always there and worked so hard.

“A huge hole has been left behind for sure.”

Husband of the late Betty, Brendan Moran was laid to rest in John’s Lane Church on Wednesday and leaves behind his children James, Andrew and Vincent, daughters-in-law Chirada, Aoife and Tina, grandchildren Beth, Caoimhe, Aisling and Nessa, brothers and sisters.