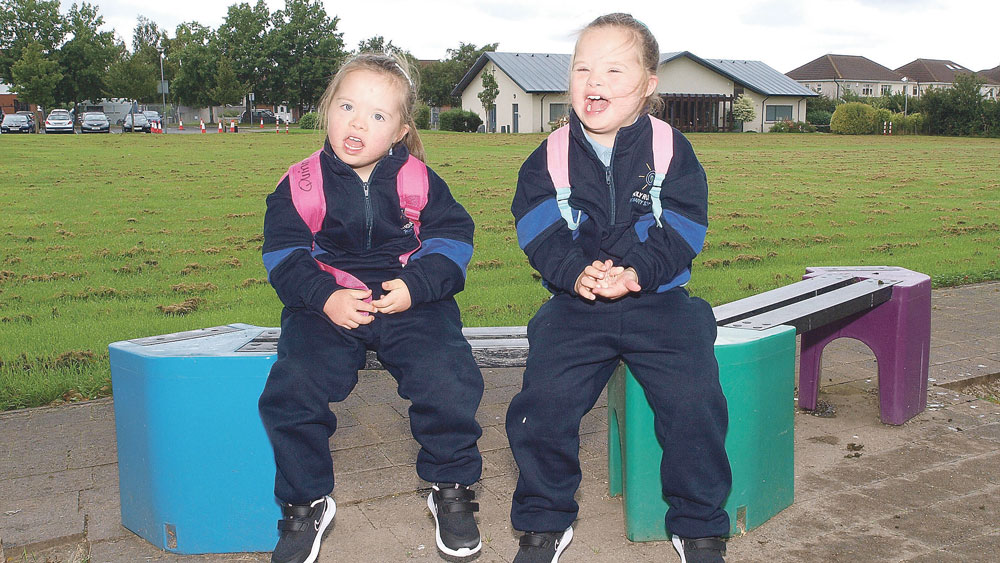 Forward to the future

Tallaght twins, Éire and Quinn Brady, who are ambassadors for Down Syndrome Ireland, started Junior Infants this week, with their parents hailing the support of the charity in supporting both family and school.

Éire and Quinn live in Kiltipper with mam Maria, dad Keith, and brothers Bradley (11) and Jake (3).

The six-and-a-half-year-old twins excitedly embarked on their first day in Holy Rosary Primary School in Tallaght on Tuesday, joining big brother Bradley, who is heading into fifth class.

For all families, the first day of school can be a mixed bag of emotions, especially for parents as they wave their little one off into the school system.

These emotions can be heightened for parents of a child with additional needs, as Éire and Quinn’s mam Maria told The Echo this week.

However, the support the family received from Down Syndrome Ireland (DSI) helped to transition the girls from pre-school to primary.

“Down Syndrome Ireland helps with the transition for everyone, parents, kids and staff of the new school,” Maria said.

“The charity helps the principal, teachers, SNAs . . . and does webinars with schools and courses on the transition into primary school for kids with Down syndrome [including Lámh, a manual sign system]. 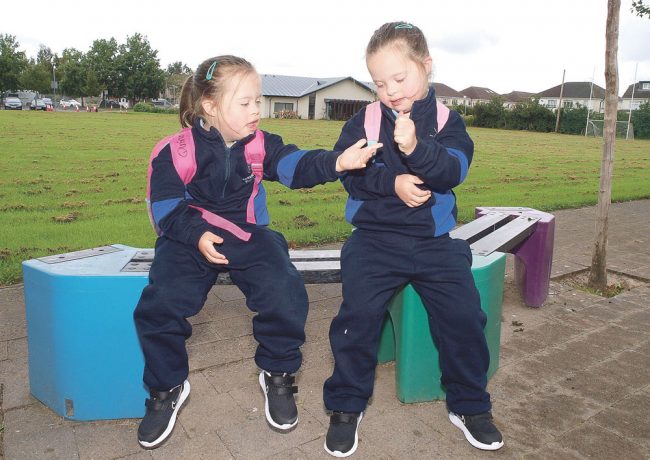 “It’s all about inclusion, and Holy Rosary has been very good . . . and are working alongside Down Syndrome Ireland.”

She added: “I’m nervous about the girls starting but I’m also excited.

“Éire and Quinn couldn’t wait to start, they’re so looking forward to school, they really are.

For the past four years, the twins were attending Fledglings Childcare for pre-school and have been linked in with Cheeverstown from an early age.

Since starting to walk at the age of four, the twins have been moving forward, with their first day in Junior Infants at their local school a happy step for the young sisters.

Ambassadors for the Woodies Hero campaign, the twins were also ambassadors for Down Syndrome Ireland, which was chosen by the Irish hardware chain as one of four charities to benefit.

Back for its seventh year, Woodies Heroes in 2021 has raised more than €500,000 for its four chosen charities, Down Syndrome Ireland, Barnardos, Autism Assistance Dogs and ISPCC Childline.

“Even with Covid, Down Syndrome Ireland didn’t stop being there,” Maria said.

“Once the girls were born, Down Syndrome Ireland were there straight away

. . .  they do so much, and also lobby the Government for supports families don’t even know they need yet.”

For further information on Down Syndrome Ireland, which provides ‘all-through-life’ supports, visit www.downsyndrome.ie.

For further information on the Woodies Heroes campaign, which people can still donate to, visit https://www.woodies.ie/heroes-2021.