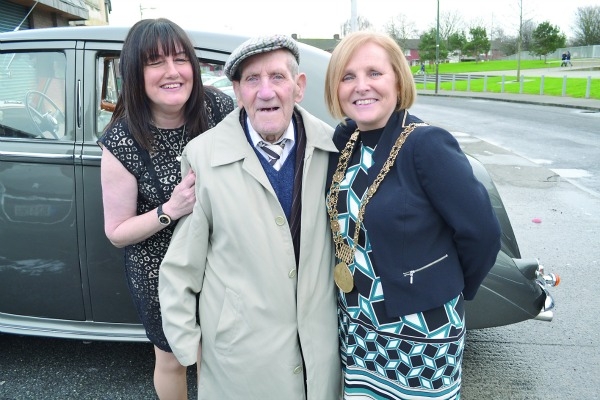 Francis celebrates his centenary in style with family and friends

BALLYFERMOT MAN Francis Delaney celebrated his 100th birthday on Wednesday.
His extended family and friends gathered in the Ballyfermot Sports and Social Club for a party to mark his centenary.

A special birthday cake was prepared for Francis who has lived most of his adult life on Claddagh Road in Ballyfermot.

Born in the inner-city, Francis moved down to Carlow where he met his late wife and they later moved to Sundrive Road before getting a house on Claddagh Road.

He worked as a bricklayer for Dublin Corporation all his life and still lives on Claddagh Road with his daughter, Helen Byrne and his grand-daughter.

A big fan of Conor McGregor, Francis was thrilled to see him win his world title in Las Vegas.

Helen Byrne told The Echo: “He loves Conor McGregor. He used to stay up late to watch the fights but he doesn’t anymore. He watched Conor’s last fight the day after and he was really excited to see Conor winning. He’s a big fan of Conor.”

Helen said: “He likes the fighting, watching horse racing, Winning Streak and the lotto. He loves the Dubs too and always watches the matches when they are playing.”

Francis used to go to Mass every day where he would meet “Charlies Angels”.

Helen explains; “On his way to mass, he would always joke when he saw the ladies walking down to the church, ‘here comes Charlies Angels’.”

Francis was presented with a certificate and a cheque from the Lord Mayor of Dublin, Councillor Críona Ní Dhálaigh.