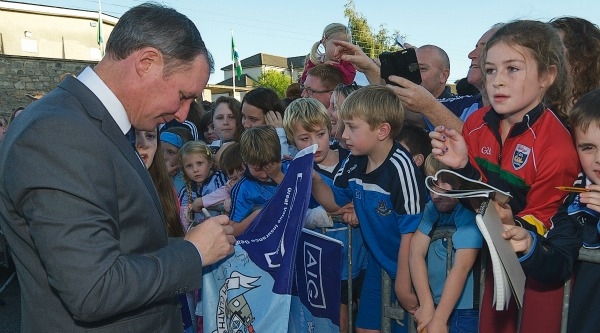 A LOCAL councillor has proposed that Clondalkin man and Dublin manager should be given the freedom of South Dublin County.

Cllr Francis Timmons has tabled the motion in the November Organisation Procedure and Finance Committee meeting proposing “That this committee proposes that Jim Gavin – Dublin GAA Manager is given the Freedom of South Dublin County Council by SDCC.’’

Speaking to The Echo, Cllr Timmons said: “Jim is a super guy. He has done Clondalkin proud, he has done Dublin proud. He is an example and role model for many young sports enthusiasts.”

Cllr Timmons went to school with Jim in Clonburris and he said it was very obvious to see then “what is his lifelong enthusiasm and support for GAA’’.

Cllr Timmons added: “He has been Dublin senior football manager since 2012. He previously managed the under-21 football team to 2010 and 2012 All-Ireland success and played senior football with Dublin and Round Towers, Clondalkin.

Sometimes Clondalkin is in the headlines for the wrong reasons.I feel we should recognise people like Jim Gavin who represents the best of Clondalkin.”

Meanwhile, Dublin manager Jim Gavin brought the Sam Maguire Cup back to his home Clondalkin on Saturday to the delight of a huge crowd.

Another Clondalkin man Frankie Roebuck played a big part behind the scenes with Dublin success while Bernard Brogan spoke to the crowd and the influence that Jim and Frankie had on the Dublin team.