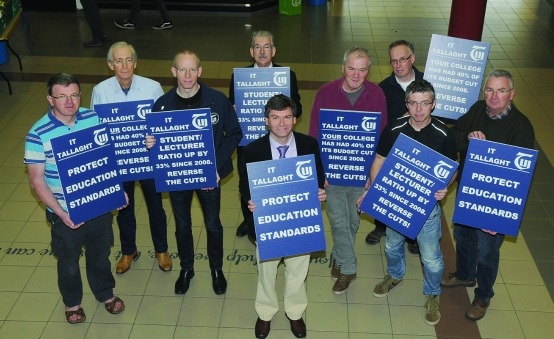 IT TALLAGHT has been hit with massive funding cuts of more than 40 per cent since 2008, with staff numbers also down by 10 per cent, The Echo has learned.

Despite student numbers increasing at the local institute, resources, like with other colleges, are being stripped – with IT Tallaght being hit with one of the biggest cuts nationwide.

With resources and staff numbers going down and student numbers rising, lecturers at IT Tallaght are staging a protest outside the college this Thursday, November 26, to voice their “very real concerns” for the future of third-level education both locally and nationally.

Maths lecturer Martin Marjoram, who is also on the National Executive Committee of the Teachers’ Union of Ireland (TUI), told The Echo: “IT Tallaght is seriously underfunded and has had massive cuts since 2008, at a time when lecturer numbers are going down and student numbers going up.

“Here at IT Tallaght we pride ourselves on giving a lot of guidance and one-to-one attention to students – a tradition which is now being undermined.

“Now we have less lecturers and bigger class sizes, which is negatively impacting on both students and staff.”

On Thursday, lecturers in Institutes of Technology right across the country will engage in protest, to voice their dissatisfaction with problems not addressed since TUI members rejected the Landsdowne Road Agreement last month.

Mr Majoram said: “There is a long-running set of problems that need to be addressed and on Thursday we will stage a protest.

He added: “We are proposing that the Government resource third-level education properly.

“We cannot have a situation where massive underfunding leaves us at a competitive loss to other countries.

“If we continue the way we are and the current system of overcrowding in classrooms and underfunding embeds itself, we cannot compete with other countries.

“We will not be able to create the level of highly skilled workers we are renowned for, and which in turn secures employment for our graduates and attracts big business into our country.

“These funding cuts will have huge ramifications into the future on both our education system and our economy.”

Nearly 5,000 students attend IT Tallaght across full- and part-time courses, with the college making third-level education accessible and relevant to those living across its catchment area – while supporting a rise in the number of young people opting for third-level.

“We’re very proud of what we have achieved at IT Tallaght”, Mr Martin said.

“We have made college accessible to young people who 25 years ago would not have seen college as an option, and would not be travelling into the city centre or further afield to pursue further education.

“These cuts are affecting one of the communities that need these resources the most and putting huge pressures on lecturers – who are already working more hours than their European colleagues.

“We need proper funding to continue to support our students, staff and course development.”

When contacted by The Echo, Dublin South West AAA TD Paul Murphy said that he is raising the issue of funding to education in the Dáil this Thursday, and calling for a reversal on cuts.

Deputy Murphy told The Echo: “The staff student ratio is up about one third, which has a devastating effect on staff working conditions and also on the learning conditions of students.

“These cuts are a short-term approach by this Government to education and they threaten our education system.

“IT Tallaght has a very positive impact and removing its funding is just diminishing what it does . . . and having a negative and long-term impact in the future on society and education as a public good.

“We will be raising this in the Dáil on Thursday to coincide with the protests, which are happening nationwide, and calling for all education sectors to be adequately resourced.”