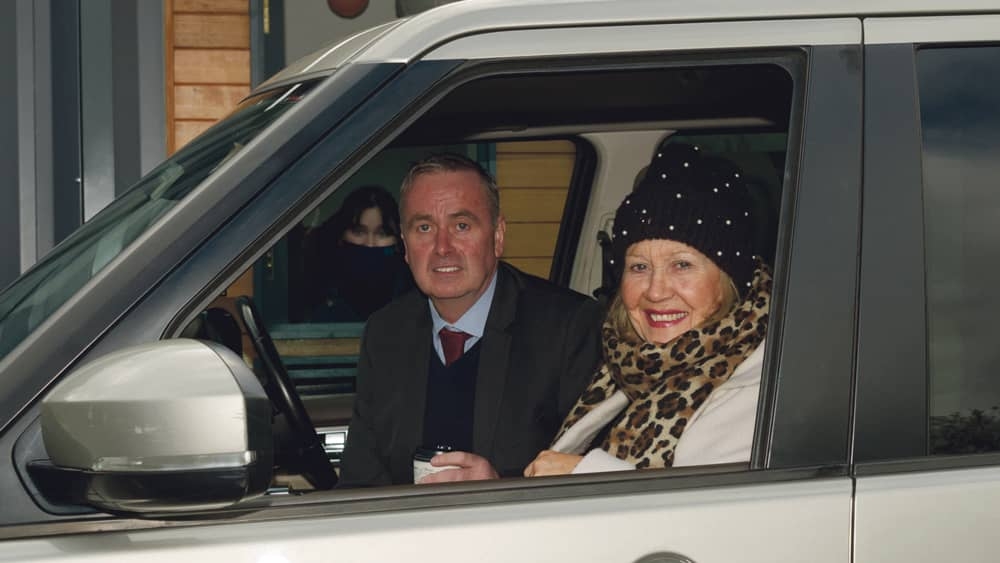 GAA Clubs are cashing in with mobile coffee shop deals

THE popularity of mobile coffee units continues to grow amidst the pandemic – with many local GAA clubs being used as locations for the fledgling businesses.

Clondalkin woman Aoife Lawler, who was a co-founder of the Irish Fairy Door Company, set up Froth Coffee alongside her business partner Christine King, and they opened a new “coffee pod” in the grounds of Round Tower GAA Club in Clondalkin last week.

Paul and Ann Burke, Erin in Background, at the coffee shop in Round Tower GAA Club

The duo had already opened a successful drive-thru coffee pod in Naas, and Aoife was determined to expand the business into her hometown.

She approached the Round Tower committee about setting up the coffee pod in the club’s car park, and they were fully supportive of the plan – which came to fruition when the pod opened last Wednesday, March 31.

“It meant an awful lot to me to have a coffee pod in Round Towers, because I’m from Clondalkin,” Aoife told The Echo. “We wanted to offer people in the area a barista experience and the drive-thru is something totally different for people.”

“All of our staff are super young and super eager, and we let them run it and make it their own,” Aoife, who runs the Innov8 Creative Academy alongside her husband Gavin, explained.

Over in Ballyboden, Finn McGarry and Simon Lambert are at the helm of Tribe Coffee, a coffee container which opened in the grounds of St Enda’s GAA Club two weeks ago – and is already a hit with locals.

Finn and Simon, who both play on St Enda’s senior hurling team, have backgrounds in market research and games promotion respectively, but for the past two years they’ve wanted to set up a coffee facility – and the pandemic made that a reality as the popularity of mobile coffee units has grown.

Finn told The Echo: “We’ve wanted to do something like this for the past two years, and we were looking at different places, and then the club got in touch with us.

“We put in for planning permission back in September, so we were waiting a good while before we could get it up and running.

Tribe Coffee has been an instant hit in the area, with business far exceeding the owners’ expectations, and it’s enjoyable for both the four staff – including Simon and Finn – and the customers.

“It’s quite enjoyable,” said Finn. “We’ve all spent so long not chatting to people or seeing people, but now it’s become like a little meeting place in the club.”

When asked about why he thinks GAA clubs have become popular locations for mobile coffee units, Finn said there are a variety of factors that are at play.

“A great thing is the amount of car parking spaces,” he said. “The car park had been empty before but now there’s cars in it all the time.

“There’s lot of room for people to socialise at a distance, and there’s also a really good community atmosphere – people have come down and given us support from the start.”

Looking ahead, Finn and Simon are hoping to expand Tribe into more locations and to add a food offering.

Continuing with the trend of coffee facilities in GAA units, Deja Brew Coffee recently reopened within the clubhouse of St Jude’s GAA Club in Templeogue.