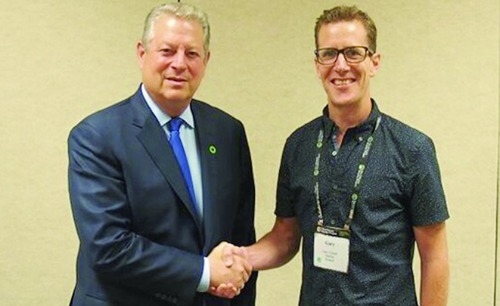 Getting the word out on the street about climate change

A TALLAGHT man is raising awareness around climate change and educating his local community around the global issue after returning from a Climate Reality Leadership event in Miami, where he met former US vice-president and climate-change pioneer Al Gore.

Gary Tyrrell, who studied Environmental Engineering in IT Tallaght before completing a Masters in Environmental Policy in UCD, has decided to raise the topic of climate change in his local community and plans to bring free talks about the issue to local schools and groups.

He presented his first talk to the Kiltipper Ramblers this week and is now encouraging schools and groups around South Dublin who are interested in education about climate change to get in touch.

Speaking to The Echo about the event, Gary said: “It surpassed all my expectations. Over 1,000 people from all over the world were at the event sharing experiences and making connections.

“There were experts from all different fields. I learnt a lot – it was so broad and so complex and a lot of people go on from the event and spread the word, bringing it back to their local communities.

“This is a new chapter for me, giving free presentations to local groups and schools in the community, and it will help to highlight climate change which has been low on the radar.

“Kids in the schools are already learning about it with the green schools programme, but education about climate change tends to stop in secondary schools.

“There are steps that we can take ourselves and the talks can help make people aware of what’s happening around the world.

“It’s getting the word out on the streets and the talks can be adjusted to suit different ages and groups.”

Gary said: “It’s not all doom and gloom, we can definitely fix the problem and get together and work on issues, while at the same time reduce our carbon footprint.

“It’s important that we make the right decisions now and the Energy Bill being proposed right now to the Irish government has some good recommendations compared to the Climate Bill, which was quite weak – it has the potential to allow a better set-up and could have a huge impact.

“There’s a consensus worldwide that climate change is a man-made problem and there needs to be massive changes in the next 20 years.

“The Dublin Climate March will take place on November 29 and part of the Global Climate March ahead of world leaders meeting in Paris to negotiate the next climate deal.

Local schools and groups interested in the topic of climate change can contact Gary via his email address – gary.tyrrell@ucdconnect.ie