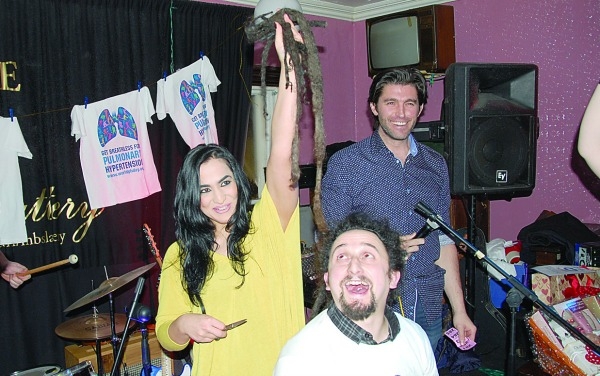 Giving the dreadlocks the chop for charity

A TALLAGHT resident chopped off his dreadlocks in support of his mam and to raise awareness and funds for research into a rare degenerative illness which affects the heart and lungs.

Colin Darker’s mam Kathleen suffers from pulmonary hypertension, a rare illness that elevates the blood pressure in the lungs, putting pressure on the heart and reducing the amount of oxygen able to reach the tissues of the body.

There is no cure for the rare illness which causes chronic fatigue, shortness of breath, chest pain, fainting and lack of mobility.

However, the Pulmonary Hypertension Appeal, which is under the Mater Foundation Dublin, offers support to patients and conducts research into the condition, with Colin and his girlfriend Avril Burbridge raising more than €4,000 for the foundation through Colin losing his dreadlocks and a mycharity.ie page.

Colin, who is from Old Bawn, told The Echo: “My mam is on oxygen 24 hour a day, even when she sleeps, needs to be in a wheelchair if she’s leaving the house and is on a mountain of medication.

“The Mater Foundation Dublin carries out research into this rare illness and they have my mam on medication that without, she wouldn’t be here.

“They also hold support meetings and groups and provide information.”

At an event called Collie Gets the Chop for Charity in Slattery’s, Rathmines, which was organised by Colin and his girlfriend Avril Burbridge, nearly a pound of hair was cut off Colin’s head in aid of pulmonary hypertension.

Avril told The Echo: “Between sponsor cards, the charity night and online donations we have made just over €4,000 and we have yet to collect some more promised sponsors.

“Everyone has been so generous and we are over the moon that we have managed to raise so much. We have doubled our original target.

“More than raising money we really wanted to raise awareness as it is such an unheard-of illness and through awareness it may save someone’s life.

“The earlier it is diagnosed the better, as it can often go mistreated for years, it resembles less severe respiratory diseases such as asthma.

“The longer it goes undiagnosed the harder it is to treat as the medications work best when caught early and before the damage put on the hearts and lungs cannot be reversed.”

Suzie from Abner Brown’s hair salon in Rathmines also donated her time for free on the night, Slattery’s provided the bar venue and Woodies in Tallaght blew up the balloons free-of-charge.

To support the drive donate at www.charity.ie/event/dreadchop4charity

For further information on the illness, visit www.pulmonaryhypertension.ie