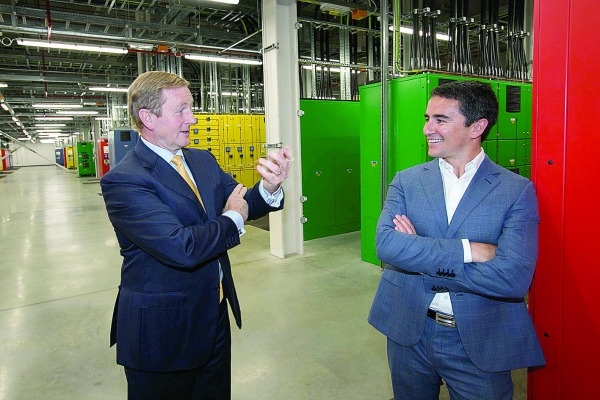 This is Google’s second major data centre investment in Ireland, and is the newest addition to Google’s global fleet of energy-efficient cloud computing facilities.

To date Google has invested over €750 million in capital assets, demonstrating a deep commitment to Ireland.

The company employs 3,000 people directly and about 3,000 people in contracted positions bringing total employment at Google Ireland sites to 6,000 people, a 20% increase in the past year, up from 5,000 12 months ago.

An Taoiseach was joined by Minister for Jobs, Enterprise and Innovation, Mary Mitchell O’Connor T.D. for the announcement.

Speaking at the event An Taoiseach Enda Kenny TD, said “The opening of this new €150 million data centre opens a new chapter in Google’s story in Ireland. With the number of people employed by Google now surpassing 6,000, the company is a fantastic leader within Ireland’s digital community.

“The Government’s priority is to make Ireland a more competitive location for new investment and job creation, and the ongoing development of Ireland’s digital industry is a key part of that plan.”

Ronan Harris, VP and Head of Google in Ireland, said: “Google has continually invested in Ireland since we first arrived here in 2003.

“This announcement is part of Google’s plan to build the world’s most energy efficient computing network and the work of our engineering team in Dublin is central to this success.

“We now employ 6,000 people here in Ireland both direct and contracted employees and we’re continually hiring, with over 250 open positions currently available at our EMEA headquarters. As Google grows globally, Ireland will continue to benefit from that growth.”

He added, “Google in Dublin is a growth engine for businesses in Ireland and right across EMEA driving job creation and economic growth.

“Innovation has always been at the heart of what we do and our teams of analysts, data scientists and engineers are recognised experts in developing new and innovative solutions for our advertisers, publishers and users across the globe”.

Construction of the data centre took just over one year to complete and 400 jobs were created during construction.

Over a dozen specialist building and engineering companies contributed to the build and over 80% of the businesses involved were Irish.

Now that it is operational, the data centre will provide employment for 30 people in a range of roles including computer technicians, electrical and mechanical engineers, catering and security staff.