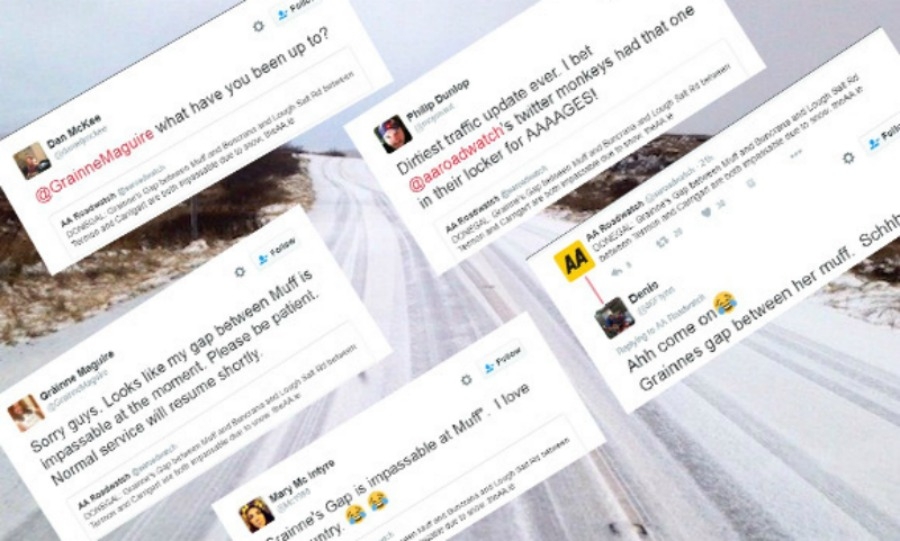 As the snow fell overnight in parts of the country some roads became impassable, and so the AA took to Twitter as they do every day to warn motorists.

Unfortunately, at least for the person tweeting, one warning produced a sentence they had probably never foreseen.

In Donegal, the well-known area called Grainne’s Gap near the village of Muff became treacherous due to heavy snow, and the below tweet caused something of a sniggering avalanche amongst Twitter users.

Now, we don’t condone any sort of lude behaviour online, but the replies gave us all the belly laughs, and after all, it is Friday.

Grainne’s Gap is impassable at Muff.
I love our country. https://t.co/XFWNEJ4uYC

Stay away from grainne’s gap! #snow

Come on lads. Who is responsible for leaving poor Grainne’s gap and her muff in that state? https://t.co/B1gI5jgGn0

@NiamhPitts don’t you just hate when Grainne’s gap is impassable?! Especially near muff! What about Sally’s gap

@aaroadwatch No where else in the world could you write this stuff Irish place names are the best .

@aaroadwatch What if you go by Athy?

@aaroadwatch Seriously. I have to get into either Grainnes gap or muff ASAP.

Sorry guys. Looks like my gap between Muff is impassable at the moment. Please be patient. Normal service will resume shortly. https://t.co/JB24obQe05

Sorry guys. Looks like my gap between Muff is impassable at the moment. Please be patient. Normal service will resume shortly. https://t.co/JB24obQe05