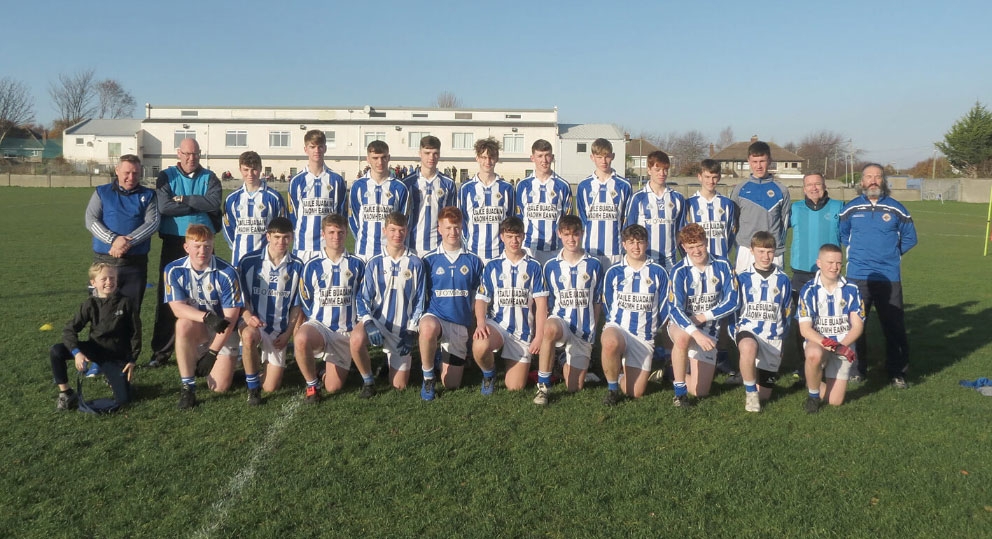 BALLYBODEN St Enda’s Minor ‘A’ football team progressed to the Championship final after beating Kilmacud Crokes on Sunday while the club’s Minor B team captured the Minor D Championship crown with a win over St Paul’s.

Silver Park played host to the Minor ‘A’ semi-final clash that saw Boden narrowly win out 2-8 to 1-1- while O’Toole Park witnessed Boden skip past St Paul’s to Minor ‘D’ success, winning 2-17 to 1-8.

Boden’s Minor As certainly had the bit between their teeth for this game given their loss to Crokes in the hurling decider the previous week.

In this clash though, both teams set the tone and traded blows for the duration of the first half as Luke McDwyer and midfielder Mark Walsh were on target for the Firhouse side.

With the interval looming, Ciaran O’Reilly and John McGinn fired over to send Boden into the break a point to the good.

Crokes levelled right after the whistle but Peter Gannon responded almost immediately when he plucked the ball out of the air and flicked it into the back of the net.

However, the Stillorgan men shot back into a lead, scoring a superb goal and followed it up with a point only for star-forward McDwyer to burn past opposition defenders and smash the ball beyond the Crokes shotstopper moments later.

Enda Cashmen was a force for Boden, with a number of his deliveries from the back leading to points from O’Reilly and Gannon.

With Crokes on the offensive they once again restored parity before a Conor Hanrahan point re-established Boden’s lead and sent them into the final against Whitehall Colmcille.

Meanwhile in O’Toole Park, it was the clinical free-taking from Boden’s Patrick Molloy and Adam Kelleher that made the difference in the Minor ‘D’ final against St Paul’s.

Still, it was Paul’s who shot into the lead, racking up three points before Boden really had the chance to kick a ball.

Through a point from full-forward Kevin Kirwan and frees from Molly and Kelleher, Enda’s fought their way back on to level terms before a Sean Flaherty goal pushed them out in front.

Picking it up on the 21-yard line, he shimmied inside and released a rocket beyond the St Paul’s keeper to raise the green flag.

Although St Paul’s did respond with a goal of their own to cut the deficit, they where still three behind at the interval.

Ballyboden bossed the middle of the park with the Cullen cousins, Robert and Evan delivering fine performances and kicking points

Boden seemed to be coasting after Aidan Garvey registered 0-3, but an own goal from Alex Craven shortened their lead to two points.

Yet substitute Brendan Kavanagh slotted in full-forward and palmed into an open net after some nice interplay with Garvey and Eoin Duffy, to fire Boden to championship glory despite conceding a late consolation goal.