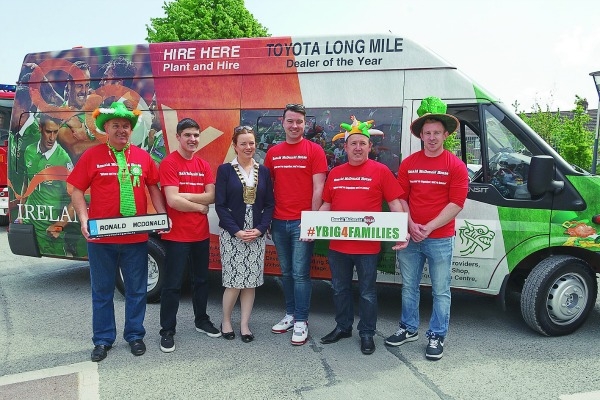 Green Tigers off to France in their unique custom fit van

A DEDICATED group of soccer fans from Woodstown in Knocklyon are set to head to France to support the Republic of Ireland in the 2016 UEFA European Championships in a unique camper van that is kitted out with all the essentials for a road trip.

The lads are calling themselves The Green Tigers Euro 2016, and recently held a fundraiser raffle in aid of Ronald McDonald house, with tickets to Ireland’s group stage matches up for grabs as prizes.

At the fundraiser, which took place on Saturday in Ronald McDonald house in Crumlin, almost €4,000 was donated to support the children’s charity.

It was attended by members of the Crumlin Garda Station, firemen from Dolphin’s Barn station, the CEO of Ronald McDonald house Marian Carroll and local politicians and representatives.

The Green Tigers will be heading to France ahead of Euro 2016, which kicks off next Friday, June 10 with a match between France and Romania.

Gabriel Curtis, who is one of the nine members of the Green Tigers heading to France, spoke to The Echo about their van and the custom changes they have made ahead of their road trip.

He said: “One of the lads in the group who is involved with the scouts heads to all of Ireland’s matches, so he had the idea for it.

“We got the van wrapped by MG Signworks, and inside the van we have a bar fitted out in the back including taps and we have even laid some astro turf on the floor.

“Our main sponsors for the trip are Toyota Long Mile, Hire Here, Green Tiger Transport, and LHM accountants with support also coming from our local pubs, businesses and football teams.”