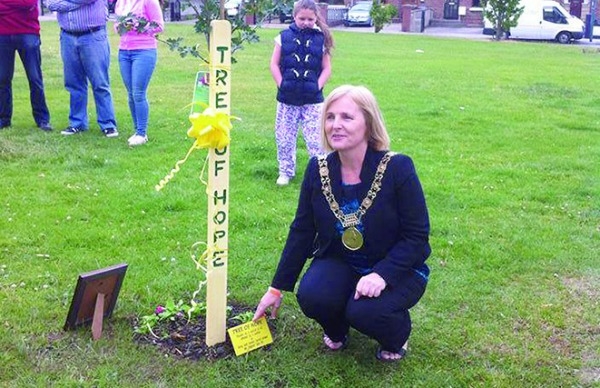 Growth of Tree of Hope

THE Tree of Hope campaign was recently honoured by the Lord Mayor of Dublin, Críona Ní Dhálaig, in a ceremony in the Mansion House.

With more than 123 trees planted not only in South Dublin but around the world since the initiative started over two years ago, the Tree of Hope continues to grow from strength to strength.

The Tree of Hope team, Noeleen, Niall, Ashling and Chris, were honoured at the ceremony earlier this month alongside other voluntary organisations working in communities.

Tree of Hope founder Noeleen Fulham told The Echo: “We are delighted and so proud of the fact that this began in Tallaght with myself and my first tree being kindly donated from the Echo newspaper.

“Little did I know it would take off as it did and over two years later we are still planting the trees with other people starting to plant all over Ireland too.

“We also received an beautiful shield from the SWICH in the heart of the Liberties in recognition of the work around the Tree Of Hope.”

Further information about where Trees of Hope are planted, and how you can get a Tree of Hope planted in your community is available at www.facebook .com/TreesofHope.