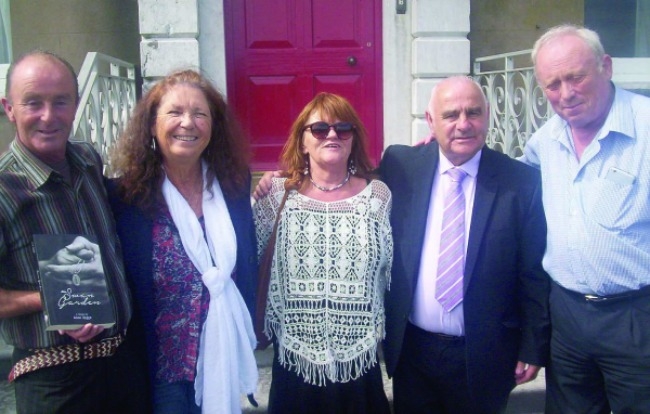 MOTHER and Baby Home survivors from South Dublin County made an emotional trip to the Bessborough home in Cork – meeting a number of people who were sent to the USA as babies.

Amongst the group was Parkwest resident Terri Harrison, who was marched home from Britain by the Catholic Crusaders in 1973 because she was single and pregnant.

In St Patrick’s, she was denied pain relief in labour and medical care after giving birth to Niall, before nuns took him away, never to be seen again.

A previously unpublished 2012 HSE report on records at Bessborough Mother and Baby Home, show a system of “institutionalisation and human trafficking”, where women and babies were considered “a commodity for trade amongst religious orders.”

Terri said: “It was a private ceremony. Sadly the clergy still control this property, and in order to join together, we must remain hidden.

“It was a sad day, but worthwhile, helping survivors to heal while our State drags out a long version of an investigation.

“Babies were sold to countries like USA. Adults return for this once a year, which I fear will cease to be, as we are once again at the mercy of the clergy allowing us inside its gates, to lay flowers on an angels’ plot designed for mothers who cannot know where the remains of their children were buried.”

Tallaght resident Tony Kelly, who started life in St Teresa’s mother and baby home in Blackrock, said it was an “emotional event” with around 100 people, including men and women returning to Ireland for the very first time after being adopted as babies.

Tony said: “They were called the banished babies, and each gave their account, including Anne Biggs, who in 2008 found her birth mother and travelled to Ireland from the USA with her own daughter.

“After learning the treatment her mother received in institutions in Ireland, Anne was inspired to write a book The Swan Garden. The event was held in the spot where it is believed hundreds of children and adults were buried.”

In it, he cites the importance of his name, which was given to him by his birth mother.

David said: “Never to speak her child’s name again – her lips sealed across the Irish Sea even at 32 years of age, the fear was much greater than her maturity. Sadly as I mention her name Elizabeth – my natural mother died in London aged 61.”
The group thanked all those who attended, and pledged to continue their fight for justice.