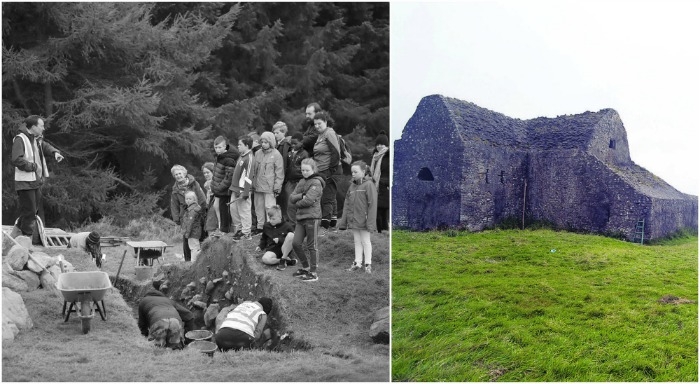 THE Hell Fire Club archeological dig has won a global archaeology award and has been listed  with some of the world’s most prestigious projects such as last year’s discovery of the HMS Terror after 168 years at the bottom of the Arctic bay.

Looming over South Dublin, the Hell Fire Club is one of the area’s most lonely and infamous places – one which grabs people’s imagination and, in some cases, the hairs on the back of their necks.

For anybody growing up in areas such as Tallaght or Rathfarnham, the Hell Fire Club has always been a place of mystery, beauty and folklore – with the site providing spectacular views over Dublin.

Perched on Montpelier Hill in the Dublin Mountains, the burnt-out shell of the ‘haunted’ Hell Fire Club – which, dating back to 1725, was built as a hunting lodge for famous politician William Conolly, aka the Speaker Conolly – underwent an archaeological dig in October.

Led by Abarta Heritage, which has been working on the project for the past three years, the dig ran for the month of October, and was the first passage tomb excavation in Ireland in over 20 years.

Neil Jackman, the Director of Abarta Heritage, told The Echo: “The two aims we had for the dig were: could we prove that the mound did represent a neolithic passage tomb, which it did, and could we find material to give a radiocarbon dating of when the tomb was built?

“We found charcoal at the lowest layer of the tomb, which was more than likely there from construction . . . and could have been on the original ground surface, maybe somebody burnt wood in a fire at some stage.

“We can radiocarbon date the charcoal as it is organic, it was living, so hopefully that will provide us with a date for the tomb.

“This will be the first tomb in the Dublin Mountains to be radiocarbon dated.”

Over the course of the dig significant finds included a stone axe and megalithic art. All the finds discovered are currently being examined by specialists.

“We have lined up a load of specialists to look at the items found and we’re also putting the finishing touches to the preliminary report, which we will make available online in the next week.

“There is a lot more to be found out through excavations and folklore studies. This was not just a once off and in my eyes it can grow and continue to grow into the future.

“It is too early to be making promises, but a second phase of excavations is the hope.”

The project was nominated in the Archaofeed awards by a member of the public for it being a ‘best practice example’ of archaeology and public engagement.

“The engagement from local people was fantastic”, Neil said.

“It was a vital part of the project and the most rewarding – everybody who came up to visit us had their own story about the Hell Fire Club.

“We were made to feel very welcome and seeing all of the schools and kids coming up was amazing too, as it’s the younger generation who will preserve the site into the future.”

He added: “It’s absolutely phenomenal that we got the award and are listed among such high-profile projects from around the world.”

Funded by South Dublin County Council, the project was also supported by Coillte, Dublin Mountain Partnership, the National Museum of Ireland and the National Monument Service.

In the coming months, the council will be working with students from Tallaght Community School to gather folklore on the Hell Fire Club and Neil will continue to deliver talks locally on the project.

To keep up to date visit www.arbartaheritage.ie.