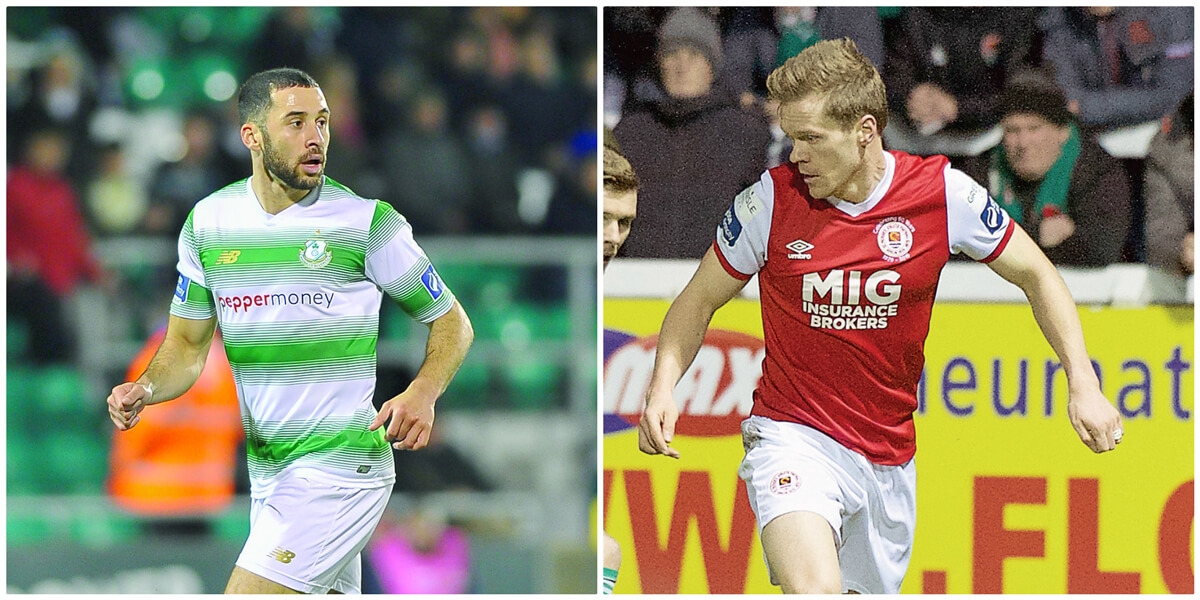 ST PATRICK’S Athletic defender Simon Madden and his Shamrock Rovers counterpart Roberto Lopes insist confidence is high among their sides as the two prepare to clash for the first time this season on Friday night in Richmond Park.

While the Hoops have gone top of the table following Monday night’s 3-0 demolition of Finn Harps in which Lopes opened the scoring, Pat’s are only two points behind in third with a match in hand.

St Patrick's Athletic defender Simon Madden and his Shamrock Rovers counterpart Roberto Lopes could well be facing off against each other tomorrow night in Richmond Park.

It makes for a mouthwatering Dublin derby and one that could well see the winner top the table, although Bohemians will be sure to have a say in that having carded 10 points from their opening four fixtures

“We’re definitely happy with the start that we’ve made, although the last couple of matches we should have won, but we’re a new team and we’re improving all the time.

“The first block of games is always difficult. Teams are feeling each other out, but as the season goes on you see teams going for it.

“We’ll be quietly confident for this match. We’re at home and every team knows that coming to Richmond Park, you’re in for a tough game.

“Since the Cork match [which Pat’s won 1-0] the atmosphere has been great. The place has been rocking, but it’s up to us to keep the supporters coming back” he stressed.

Madden has been part of a St Pat’s defence that has coughed up only one goal so far this season, but credits the team for that saying “The strikers are our first line of defence. They press hard and the work rate is really good.

“Mentally we’re strong and we’re able to see out games and keep it tight at the back.

“The big difference from last year is that there’s more legs in the team, more energy and youth.

“Mikey [Drennan] has been doing really well. With him and Gary Shaw we’ve got two top strikers. We have the quality in the team and the goals will come” he added.

While Madden insists there is a confident mood in the Pat’s camp, Lopes and the Hoops are coming into this fixture in a positive frame of mind after their convincing win over Finn Harps.

“It was a massive result for us because we were the only two teams playing that night and it was a chance for us to go top” said Lopes.

“I know teams have a game in hand, but we’ve got the points on the board and that sends out a strong message.

“We were unlucky against Bohs before that, going down to ten men, but we played well and it was only a soft penalty that undid us. Dundalk [0-0] was a tight match, but it was great to get back to winning ways against Finn Harps.

“They started the season well and we knew it was going to be a tough. They were going to be no push-overs, but we approached the game the right way and we got the result.

“We’re looking forward to the match against Pat’s. It’s always a great game. It’s a very difficult place to go and we’ll have to start at a high intensity. We’ll have to match the enthusiasm they and their supporters will show” he stressed.