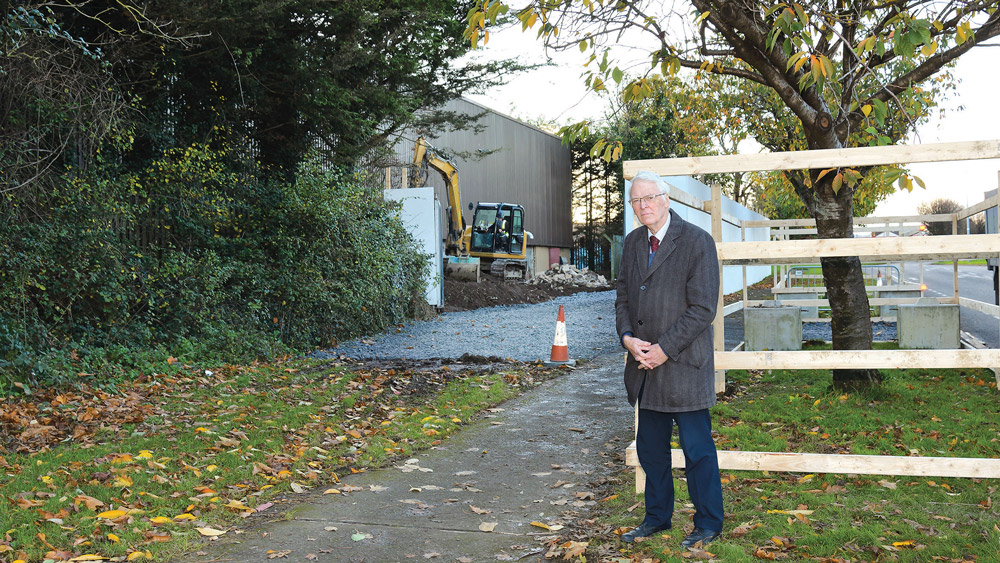 CONCERNS about hoarding placed around a warehouse on Mayberry Road in Kilnamanagh continue to grow after additional hoarding was erected, according to a councillor.

As reported in The Echo last month, hoarding has gone up around the property at McHugh’s Components, to facilitate the construction of an extension to the existing warehouse.

However, there were concerns about the hoarding appearing to be placed on council-owned land and residents were questioning why it was allowed to be put up.

South Dublin County Council provided a copy of the S254 Hoarding Licence that was granted to Elliott Properties for the development in response to a query from The Echo last month.

The council stated: “This hoarding license is to facilitate safe development of the site and to protect the health and safety of public road and footpath users and may also apply to the use of the public road space at the specific location.

“The hoarding is to be removed upon completion of works, when following council inspection, the licence will be withdrawn.”

On Monday morning (November 7) , additional hoarding was erected at the site and gravel was placed on part of the footpath, which has been a cause of concern for locals.

Fianna Fáil councillor for Tallaght Central, Charlie O’Connor, told The Echo: “Further works were carried out at the site on Monday, including further structures.

“They were also laying gravel across the grass verge, effectively creating – in the view of the community – an access for vehicles in what has been described as a compound.

“I think there are questions for the council’s planning department and roads department as to why they’re allowing such works to take place on this grass verge and on their lands.

“The community is asking how the developer got permission for this, and the community and councillors do not really know what’s going on.

“If you take the council’s decision to issue a hoarding licence – did this include the gate that’s there and the additional works taking place there lately?”

Cllr O’Connor said he will raise the issue at a Tallaght Area Committee later this month with the aim of getting a response from council management.

He previously described the council as being “slow” to respond to his queries about the development, which the council later refuted.

On Wednesday afternoon, a South Dublin County Council spokeswoman confirmed to The Echo that the works on site are permitted under the Hoarding Licence.

“This site was inspected this morning to ensure that the builder was in compliance with his Hoarding Licence,” she said.

“Our engineer has confirmed that everything is above board.

“The Council’s Public Realm Section also conditioned the developer to protect the trees in the area while carrying out the building works. This they have done and there is no issue with same.”

NEWER POSTMan who choked ex-partner given 14 months in prison
OLDER POSTThe Art of Science: Creations from a fusion of art and science