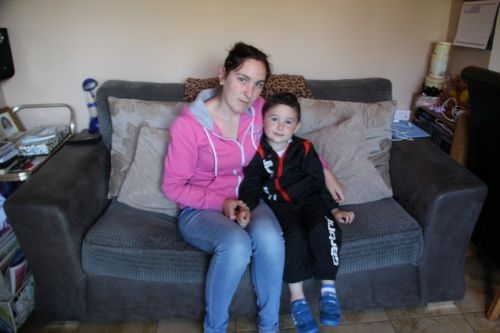 A HOMELESS family faced with a daily, five-hour round trip to school are this week looking forward to September 1, after they secured accommodation in Tallaght.

As reported in last week’s Echo, Karen Sutton and her 4-year-old son Ciaran have been homeless since January and last month were placed by the local authority in a hotel in Santry, which is approximately 25km away from their hometown of Tallaght.

Karen’s son Ciaran is starting school in Sacred Heart Junior National School this September, and faced a 6.30am start each morning – which involved two buses and a Luas.

However, this week Karen’s bravery in speaking out helped her to secure a council-owned unit in Tallaght Cross.
She told The Echo: “I didn’t want to go to the papers or make a big deal out of this, but I was left with no choice. My son’s education was on the line here.

“Expecting families to do that kind of travelling to school every day is wrong, before my child even got to school he’d be wrecked.

“Social Welfare also gave me a €20 weekly travel allowance, but that was not going to stretch far with four buses and two Luas trips daily.

“It’s just really sad that so many families are in similar situations and have to fight for everything.”
She added: “We have been given this accommodation for three months and in the meantime, we will hopefully find permanent accommodation. “I’m delighted and really looking forward to Ciaran starting school. He’s really excited now too.”

Karen, Ciaran and her nine-month-old baby have been placed in a new 65-unit project in Tallaght Cross, which is providing supported, temporary accommodation for families while they secure their own accommodation.

Managed by TUATH approved housing authority and in association with Focus Ireland, the project is being utilised and proving beneficial.

Sinn Féin councillor Cathal King, who helped Karen secure a unit, said: “Getting your child ready for school is difficult enough without this journey to school thrown in on top.

“A number of people moved on from the units to permanent accommodation, opening up some spaces for new families – including Karen, who was given a unit based on her distance away from Ciaran’s school.”

He added: “There is so much pressure on local authorities to provide housing and the fact that South Dublin County Council and Dublin City Council didn’t get their homeless budget until June of this year is disgraceful.

“The Government are passing the buck onto local authorities and councillors when it comes to the housing crisis but they are not investing or providing the funding to address the issue.

“I think the fact that the homeless budget should have been paid in January and we got it in June says it all really.
“Minister Alan Kelly and the Government needs to step up to the plate here and take responsibility. Everybody needs to be working together to change the situation with housing.”