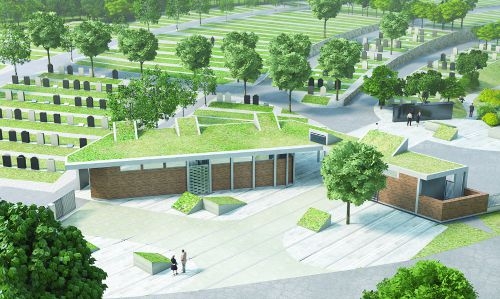 Residents fear that ‘waste facility’ will cause problems

AN application for a waste facility permit on proposed cemetery land in Lucan – has led to concerns in the community over the nature of works involved.

Esker Lawns Cemetery Ltd submitted the application to South Dublin County Council for the waste permit and intend to carry out remediation works at Cherbury Park Road – including the excavation of 22,000 tonnes of soil and importation of clean soil.

Directors at Esker Lawns Cemetery include Brian McElroy, of Brian McElroy Funeral Directors.
Mr Richard Butler, Senior Town Planner and Landscape Architect, spokeman on behalf of Esker Lawns Cemetery Ltd, said that: “Planning permission was granted for a new lawn cemetery at Esker in 2012. The development will make sustainable use of an under-utilised urban site that is currently in poor condition.

“In remediating the site that contains some construction waste the development will dramatically improve the environmental condition of the site and environs. No permanent building will be constructed as part of the remediation process.”

He then added: “No material will be burnt. The only material to be brought to site will be clean clay to cover the ground after remediation and allow for the establishment of a high amenity landscape. The cemetery, to be constructed after remediation, will introduce a high-quality parkland landscape to the urban area, improving the local amenities considerably and providing much-needed grave spaces in West Dublin.”

Lucan TD Derek Keating has called a public meeting on September 3 at the Spa Hotel, to discuss proposals for the waste facility.

In a letter sent to residents, Deputy Keating states “up to 100,000 tonnes of material” will be imported to the area and cites processing procedures, including “composting, gasification and pyrolisos – a process that involves burning.”

Responding to resident’s concerns, Independent councillor Paul Gogarty circulated a letter, stating the waste permit is “purely for clearance of waste materials from a small part of the land and does not involve treating any hazardous materials on site.”

Speaking to The Echo, Cllr Gogarty said: “I spoke to the owners of the site and the consultant, and put out factual information to allay resident concerns. It will cause traffic changes – a lot of school kids use the footbridge. There are also fears about rat problems, but all this is a by-product of planning permission.”

He continued: “Most of the truck deliveries will be clean top-soil and the permit ensures a strict time of delivery. I grew up in Cherbury – the land was originally a quarry, and would have had tyres, wood and metal waste. Gradually grass grew over it. Some of the concerns expressed have been an exaggeration.”

Derek Keating said the public meeting is being held to “ascertain facts and clarify methods intended for use.”
Deputy Keating said: “Residents of Esker Lawns and Cherbury contacted me and expressed their fears concerning a notice of application for a waste facility permit that had appeared in The Echo. They voiced their concerns about the implications of such activity, should this be approved without restriction or limitation.

“To deal with the level of feeling about such an eventuality, I have convened a public meeting to take place in the Spa Hotel on September 3 at 7.30pm. I have invited Esker Lawn Cemetery Limited and other public representatives to the meeting and would seek to clarify the quantities and methods intended for use.”