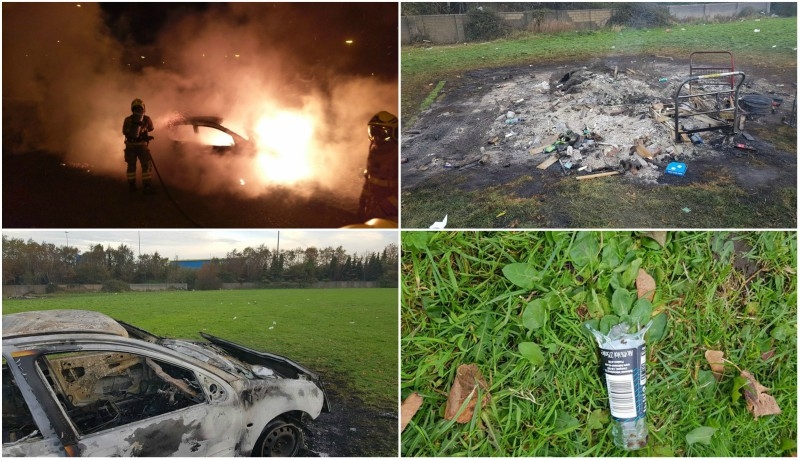 ‘Hundreds of hours of hard work destroyed in one evening’

The impact of Halloween was visible on communities this morning when members of Kilnamanagh AFC woke up to find their juvenile training pitches destroyed by fire and a night of vandalism.

Kilnamanagh is one of many communities to find their green spaces charred by bonfires and littered with waste after Halloween night.

Kilnamanagh AFC posted pictures of the aftermath of Halloween night on their training area, which is located across from their playing pitches.

Pictures posted by the club on Facebook show cans and broken bottles strewn across the field, tyre marks cutting through the grass, the remnants of a large bonfire and the exoskeleton of a burnt-out car.

The photos were captioned, "Hundreds of hours of hard work destroyed in one evening."

The car fire was dealt with by Dublin Fire Brigade as they battled hundreds of bonfire blazes across the capital last night.

According to club chairman Johnny Mackin, the car was removed on Wednesday morning but the club’s young players will not be able to use to space until next week when the remains of the bonfire can be safely removed.

He told Echo.ie on Wednesday: “I imagine it will take a couple of days for the bonfire to be removed, it’s still smoldering.

“Training will get back to normal next week. There is no point risking injury with the broken glass.”

Mr Mackin said that while the Halloween bonfire on the green space is an annual occurrence, he believes the damage has become worse over the years, with more people learning of bonfires through social media.

He said: “Every year it gets worse and worse. I think social media gives [bonfires] more attention… the bonfire attracts an awful crowd.”

Mr Mackin said the club has been asking South Dublin County Council to redevelop their grounds for years and has asked for a clubhouse and changing facilities for ‘eight to 10 years’.

However, he claims there has been no progress made on this to date.

Mr Mackin also said the council had denied their request to install fencing around their training area.

A spokesperson for South Dublin County Council said: “It is regrettable that this, and other locations throughout the county, were needlessly damaged during “Halloween Celebrations” and that these actions by a minority have caused much distress to clubs, communities and the Council alike.

“The extent of damage at these locations will be assessed in the coming days and reinstatement works will then be prioritised. It is most likely that works will commence with the reinstatement of playing pitches which were damaged.

“Notwithstanding the recent damage, it is not currently intended to provide walls, fences etc at these locations which form part of the overall public space used as public amenities.”