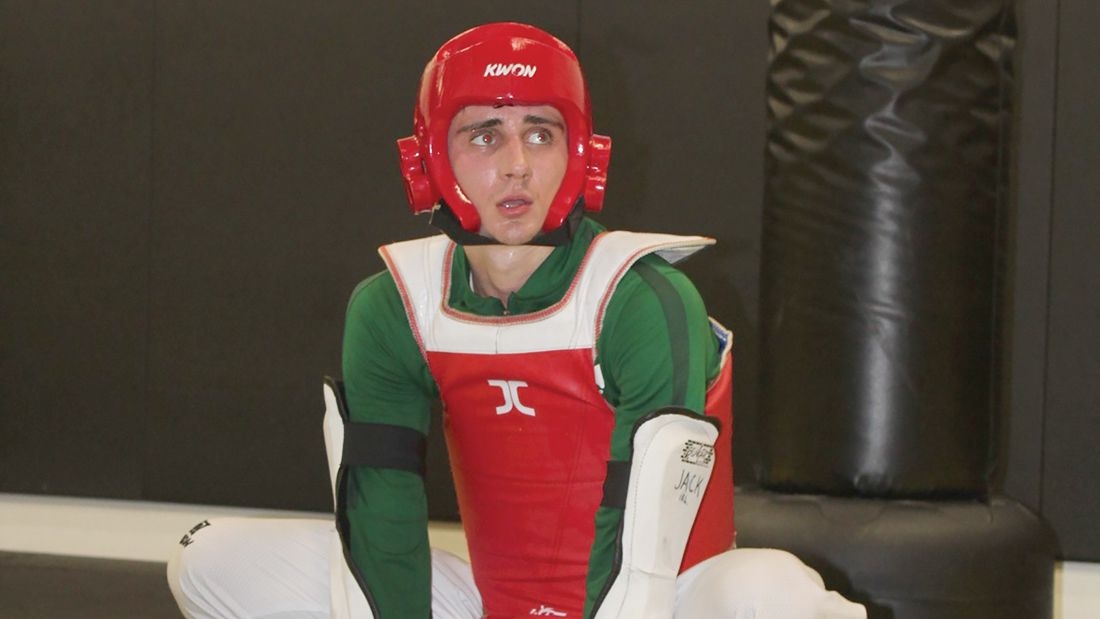 “I don’t feel like I’ve taken a step back”

SOUTH Dublin Taekwondo star Jack Woolley believes he has used his time well during the COVID lockdown and is ready to hit the ground running as he continues his preparation for next year’s Olympic Games.

The Tallaght man, who made the cut for Tokyo 2021 back in December, insists his training has benefitted from an absence of competition over the past few months.

South Dublin's Taekwondo’s Jack Woolley after another gruelling training session. The Tallaght man believes he has used his time well in lockdown to stay on track in his preparation for next year’s Olympic Games in Tokyo.

“I’m probably feeling happier with the way my training has been going now, because before I would have been busy with competitions and I would have been focusing on training just to keep up to scratch in order to perform in those tournaments” Woolley told The Echo.

“I would have been using those competitions to perhaps try use my opposite leg more or just diversify more, but now I’ve been doing all that in training. I’ve been really focused on improving, getting fitter, getting stronger. I’ve been using my time right.

“There’s no point at this stage analysing potential opponents this far out [from the Olympic Games]. In fact I’ve been analysing myself more, looking back on my own fights, self analysing. I’ve just been working on my heartrate and fitness.

“I also feel that, because I don’t normally have that many training partners, I’ve still been training at about 70 percent of my normal standard, whereas other competitors who are used to having big massive teams around them, they’ve lost more and they’ll be struggling to regain what they had.

“It has been a tough time, but I feel like we got through it as best we could. I don’t feel like I’ve taken a step back” he said.

It is hoped that top international Taekwondo will be back around late September/early October, and Woolley should be ready to hit the ground running.

The Tallaght man was to have potentially taken part in a double header tournament and training camp in Tahiti this month.

But while the tourna-ments may have stopped, his training has not, and he will now be looking to pick up where he left off after a great start to 2020 that saw him win both the US Open and Sofia Open events, securing 30 of his allowable 40 ranking points for the year.

And he will be back in the hunt for his final ten points which can be bagged with a gold medal at one of the upcoming ranking tournaments.

Woolley’s Coach Robert Taaffe also emphasised the importance of his protégé having been allowed to train without the distraction of competition.

“We are often away at events two or three times a month, and Jack has been at this almost continuously since 2015.

“It has been a long time on the road, and I feel this time away from the arena will be a great asset and will help us build added dimensions to his already full catalogue of fighting traits.

“That said, it will be great to get back. Jack is already qualified, some pressure is off. We have time to trial and error new things, and build for key events later in the year.

“There has also been a welcome time to allow for detailed planning for the next cycle of events up to Paris for both Jack and his colleagues” he added.

Woolley now splits his time between training his taekwondo in Tallaght, and focusing on his ancillary training at the Sport Ireland Institute in Blanchardstown, and is on hand always to train alongside his team mates at South Dublin Taekwondo online and outdoors.

SDTKD are tentatively looking forward to a return to normal training at their performance training ven-ue in The Arena, Tallaght.

The club have been training online with a full schedule, and, more recently, have commenced outdoor training with permits secured with the help of South Dublin Sports Partnership.

“We have made many adjustments at the club with adapted scheduling to welcome members back when the time is right” said Taaffe.

NEWER POSTNature on our doorsteps: Cinnabar Moths
OLDER POSTCoach Sutcliffe is delighted to have McGregor back training in Crumlin