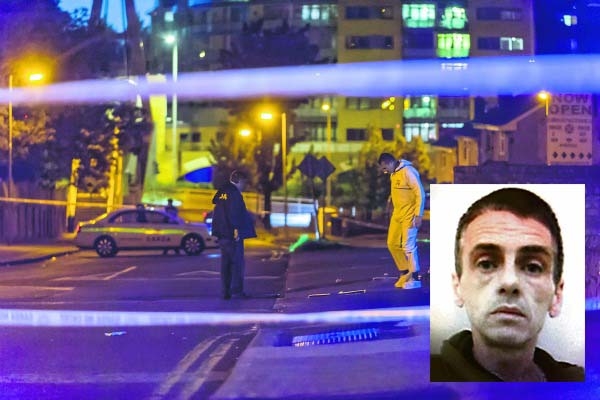 A GUNMAN fired five shots at a man standing at a busy roundabout outside a shopping centre in Tallaght, an inquest heard.

Karl Wynne (45) of Russell Avenue, Tallaght, Dublin 24, died on July 19, 2013, two months after he was shot. He sustained gunshot wounds to the head, neck and abdomen after he was shot by a pillion passenger on a motorbike.

The gunman dismounted the motorbike and stood over the man lying on the footpath to fire two more shots from a semi-automatic pistol, Dublin Coroner’s Court heard.

Mr Wynne, a father of one, had left his partner Lorraine Lynch and their son to meet someone on May 30, 2013. Ms Lynch, who broke down in tears as she entered the witness box, said he talked on the phone with someone she felt he knew before leaving the house.

“It was a male voice. He (Karl) was trying to buy cocaine. It was a civilised call, as if he knew him (the caller) well,” she said. “I told him I didn’t want him to go out. He said he wouldn’t be long,” she said.

Gardaí had previously called to the house to talk to her partner about a threat made against him, Ms Lynch said.
“The guards had been around but he ran out the back of the house,” Ms Lynch said.

Witness James Reid saw the shooting in his rear-view mirror as he passed St Dominic’s Shopping Centre in Tallaght.

“I saw a black motorbike with two men. The driver was crouched down and didn’t move. The second guy had his arm out, pointed at a man standing on the footpath. I heard two shots,” he said.

The motorbike sped off in the direction of the Tallaght bypass so fast that the passenger was almost thrown from the bike as it passed over a speed bump, Mr Reid said. He walked over to the man lying on the path.

“I looked down and saw it was Karl Wynne. He was lying on his back with his two arms up and his palms were facing the sky,” Mr Reid said.

Neither the weapon nor the motorbike have been recovered, Det Insp John Walsh told the court. Some 100 statements were taken by Gardaí and a file was submitted to the Director of Public Prosecutions but no charges were brought due to insufficient evidence. The file remains open, Det Insp Walsh said.

Mr Wynne was admitted to Tallaght Hospital at 10.04pm. He remained seriously ill but was responsive and could speak to his partner.

“He could say my name. He knew who I was. He would ask the nurse to call me,” Ms Lynch said.

The deceased’s brother Kevin Wynne left the hospital hours before he died.

“There was no one there when he died, I got the call about an hour after,” he said.

Mr Wynne spent fifty days in the intensive care unit before he passed away on July 19, 2013.

The jury returned a verdict of unlawful killing by persons unknown.