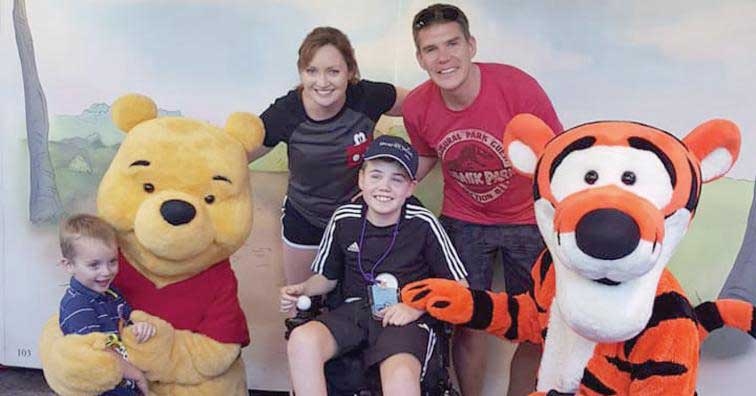 IT WAS A trip of lifetime for Lucan’s James Casserly and his family when they went to visit Disneyworld courtesy of the Make-A-Wish Foundation.

James, his mother, Vicki Casserly, his dad, Dan Naughton and James’s brother, Tom Naughton, all travelled to the Sunshine State and have just returned home to Lucan.

James (13) got the surprise of his life just before Christmas when his wish-giver paid a visit and announced that the family would be going to Disneyworld.

It was like a double visit from Santa Claus as James was provided with an itinerary of the trip ahead so he, his little brother and their parents could dream ahead of the trip.

A big fan of rollercoasters, James could not wait to get on the plane. The family flew Aer Lingus direct to Florida. Vicki heaped praise on the Dublin Airport staff who assisted James on his way to the plane.

James has Cerebral Palsy, which affects his core and lower limbs. He had a selective dorsal rhizotomy in April 2012 which involved intensive physio recovery.

A keen sportsman, James had a busy 2018, competing in the Dublin City Marathon, running cross-country and playing frame football with Esker Celtic FC.

When the family got to Florida, they got to go on a number of attractions including Thunder Mountain and the Hollywood Tower of Terrors, which was a particular favourite of James.

The family received close support from the Make-A-Wish Foundation during their visit. James was given a special “Genie Pass”.

Vicki told The Echo: “As a Make-A-Wish Child, James was given a ‘Genie’ Pass which allowed us to go to the top of the queue of each attraction. James was thrilled to ride on the rollercoasters. It is something that he is crazy about.”

The family stayed in the Make-A-Wish village.

A special highlight for James was that his little brother, Tom, got to meet “Winnie-The-Pooh” and “Tigger”.

“That is one of the special memories that we can take home with us. James was so happy to see the delight on his baby brother’s face. It really was lovely.”

After a week, the Casserly’s flew home to Dublin but they are gearing up for a busy 2019. Over the years, Team James has raised over €100,000 for Barretstown, the children’s charity that offers specially designed camps and programmes for children living with a serious illness and their families.

Their fundraising work will continue throughout 2019.