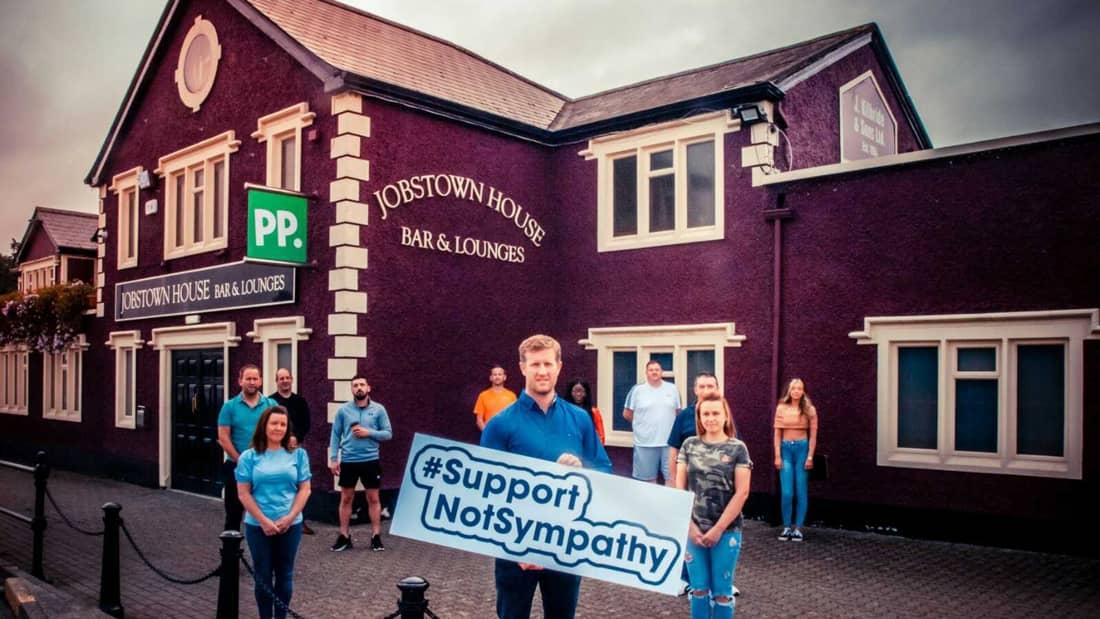 Jobstown House part of nationwide call for ‘support not sympathy’

THE Jobstown House was among a number of pubs nationwide who today called for #SupportNotSympathy from Government.

The campaign marks five months since pubs around the country closed their doors due to Covid-19 measures.

John (front) with staff of the Jobstown House

Last week, the opening of pubs, which don't serve food, was further delayed, with the industry now asking for support for pubs that have to remain closed.

The Jobstown House, which serves food, has re-opened under the new guidelines.

The Tallaght pub, which has been in the Kilbride family since 1964, is now run by John Kilbride.

Speaking with The Echo, John said: “There is around 3,500 pubs around the country still closed.

“We’ve re-opened at reduced capacity and only four days a week.

“We’ve gotten great support from local people, the support has been absolutely amazing…we’ve got great customers.

“The guys are also delighted to be back in work, the staff appreciate having a job.

“However, if it wasn’t for the wage subsidary scheme we wouldn’t be open.

John added how many pubs still closed are family-run, generational pubs that should be supported now, so they can re-open.

“People think it’s only the publican that’s suffering, but there’s a family and staff”, he said.

“Pubs should be allowed to re-open under clear guidelines.

“However, if pubs cannot re-open, they need to be supported to remain closed, so that they don’t go out of business and when the time is right, they can open.”

For further details on the Jobstown House’s opening hours and menu, visit its Facebook page HERE

NEWER POSTCoronavirus: No further deaths and 66 new cases
OLDER POSTFive arrests and cash in the region of €70k seized