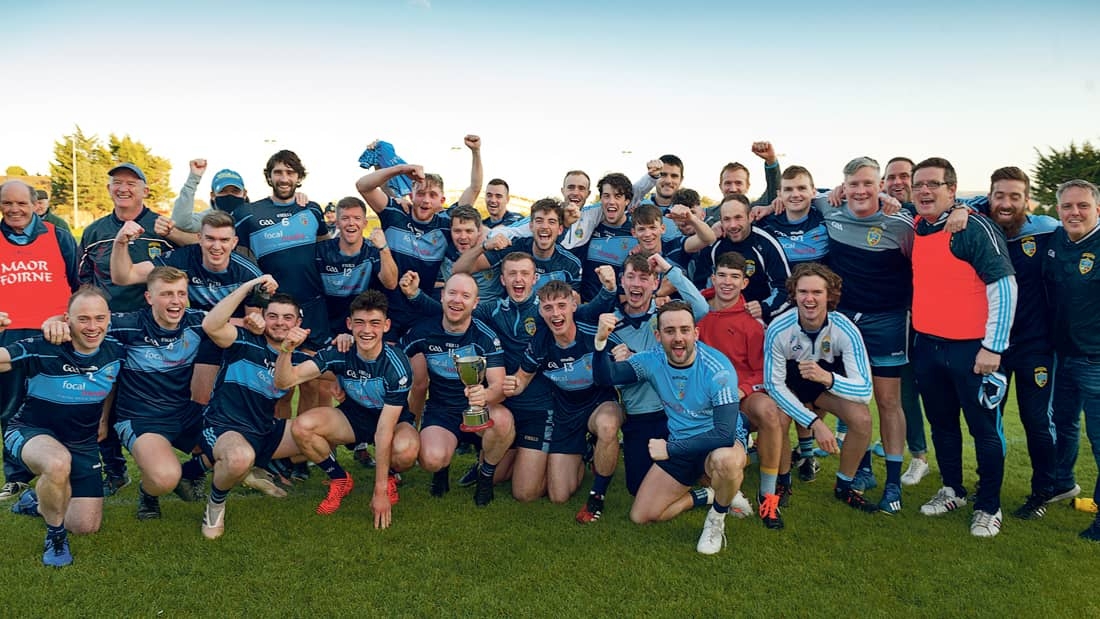 ST JUDE’S secured the Dublin Intermediate All County Football Championship crown with a clinical display against Kilmacud Crokes at O’Toole Park on Saturday.

Ritchie English’s impressive haul of 11 points went a long way towards ensuring the silverware was accrued by the Wellington Lane men, while inside forwards Declan Donnelly (0-3) and Alan Connolly (0-2) also stood tall. Known best for his exploits with the club’s senior hurlers, Ger McManus was an assured and commanding presence at centre half-back.

Team captain Ross O’Brien also appeared off the bench in the final-quarter to help his side over the line in the most comprehensive of fashions.

Mark Coughlan led the Crokes challenge, contributing an excellent tally of 0-7 over the course of the contest.

The Stillorgan outfit were defending champions at this grade but, on this occasion, they ultimately came off second best.

Following a 3-12 to 2-10 semi-final victory over rivals Ballyboden St Enda’s, Jude’s were hell-bent on going a step further in this season’s competition.

Playing with the aid of a slight breeze, they moved two points clear inside the opening five minutes of the action.

After English superbly split the posts off a 35-metre free, a memorable Connolly run released Neal Mangan for an excellent score. Crokes fired back through Conor Kane, but this was to be their sole point of the first-quarter.

Jude’s were patiently controlling possession, waiting for the precise moment to unleash a shot at the uprights. English converted another placed-ball effort out towards the left-hand touchline, before Simon Murphy and Donnelly (after claiming an impressive mark) raised further white flags.

English’s third point of the game on 17 minutes was his first from open play and it meant Jude’s were 0-6 to 0-1 ahead in time for the opening period water break. While this offered Crokes a much-needed breather, Jude’s continued to dominate nonetheless.

Already an influential presence in attack, English underlined his undoubted quality with four points in the space of nine minutes. Murphy was denied by the fingertips of Gavin Sheridan in the middle of this sequence as Jude’s looked to place the tie beyond the reach of their opponents.

Crokes finally addressed their scoring drought with a pointed Egan free deep into stoppage-time, but Jude’s remained in a comfortable position at the break – leading 0-10 to 0-2.

Having failed to sparkle in the first half, Kilmacud were expected to provide greater resistance on the restart. Coughlan got his account up and running with a brace of quick points and Michael Nealon combined to good effect with Egan for a similar strike.

Crokes were now beginning to gather momentum and courtesy of Coughlan and Anthony Quinn singles, their deficit was down to three on the stroke of 40 minutes. Jude’s initially struggled to rediscover the rhythm that had served them so well before the interval.

However, thanks to the outstanding English, they subsequently reinforced their superiority. His three-point salvo – and another Donnelly contribution from an offensive mark – left Crokes with a mountain to climb in the closing stages.

Coughlan and Barry O’Rorke pointed frees to offer them a glimmer of hope, but with their leader O’Brien introduced on the ’40’, Jude’s maintained a stranglehold on the proceedings.

The dynamic duo of English and Donnelly enhanced their personal totals and although Coughlan found the target either side of Connolly’s fisted point, a Jude’s triumph was never in doubt.

Moments after replacing the tireless McManamon, Darren Gallagher found the range off a close-in free. The battling Coughlan responded once again at the opposite end, but Connolly had the final say for a jubilant St Jude’s with his second score of the half.