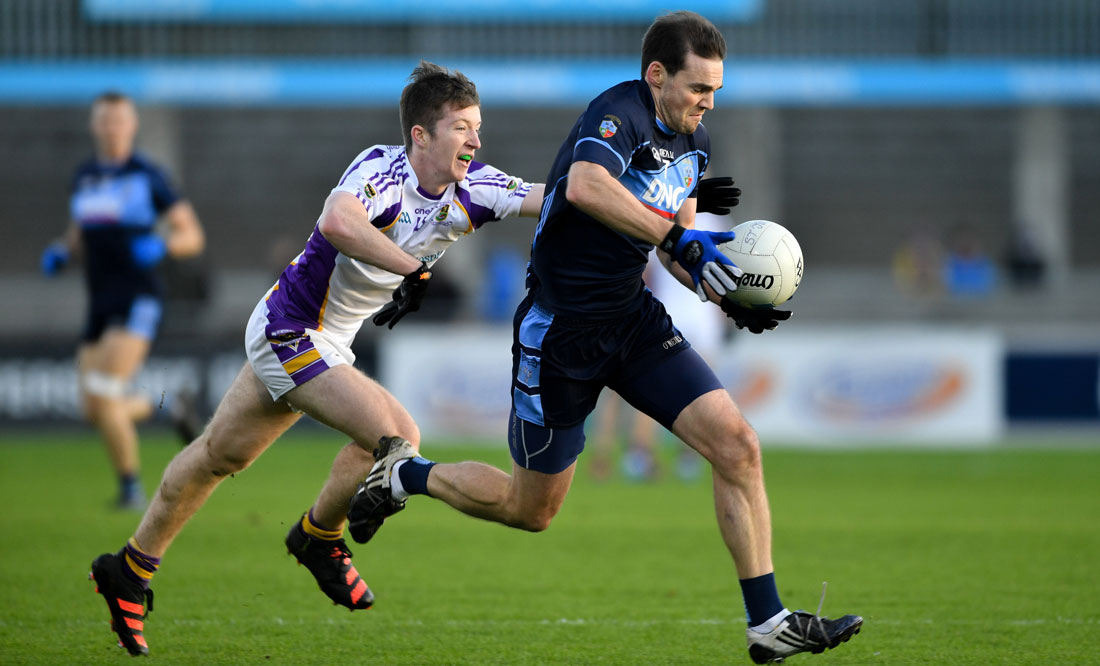 Chris Guckian of St. Jude's in action against Hugh Kenny of Kilmacud Crokes during the Go Ahead Dublin County Senior Club Football Championship Final match between St Jude's and Kilmacud Crokes at Parnell Park in Dublin. Photo by Daire Brennan/Sportsfile

There was heartbreak for St Jude’s at Parnell Park this evening as a 64th-minute point from substitute Callum Pearson saw them losing out by a single point (1-7 to 1-6) to Kilmacud Crokes in a low-scoring Dublin Senior Football Championship decider.

The Templeogue outfit looked set for an historic success at this grade when they led by five points in the early stages of the second half.

Gareth Roche’s third-time finalists remained in the ascendancy late on in the contest – despite former Sky Blues footballer Paul Mannion kicking four points for Crokes – before Aidan Jones and Callum Pearson pointed to secure top honours for the Stillorgan men in the most dramatic of circumstances.

Billed as a mouth-watering encounter, this game struggled badly to catch fire early on.

Jude’s netminder Paul Copeland produced an outstanding point-blank save from Dara Mullin in the third-minute, but the tie remarkably remained scoreless at the first half water break.

However, Jude’s finally broke the deadlock in the 23rd-minute as eight-time All-Ireland champion Kevin McManamon released Alan Connolly for a superb finish to the Crokes net.

Their opponents eventually got up and running with a trademark Mannion point, but Daragh Kavanagh responded in kind at the opposite end to give Jude’s a 1-1 to 0-1 cushion at the end of a largely forgettable opening period.

This is a position they would have gladly taken before the game and the Wellington Lane side created further daylight on the resumption through David Mannix and Connolly points.

Mannix added a second score from distance and while goalkeeper Conor Ferris and Mannion converted frees at the opposite end, Jude’s were four clear (1-4 to 0-3) heading into the final quarter.

Yet the Crokes challenge was beginning to rise and following a brace of points by the increasingly-influential Mannion, Cian O’Connor fired Robbie Brennan’s charges into the lead with a 51st-minute goal.

This threw down the gauntlet to Jude’s, but they responded impressively with back-to-back points from Mannix and Cork native Brian Coakley.

The game seemed destined for 20 additional minutes when Jones levelled matters just past the hour mark, but there was enough time left for Pearson to force the issue as he split the uprights at an awkward left-hand angle.