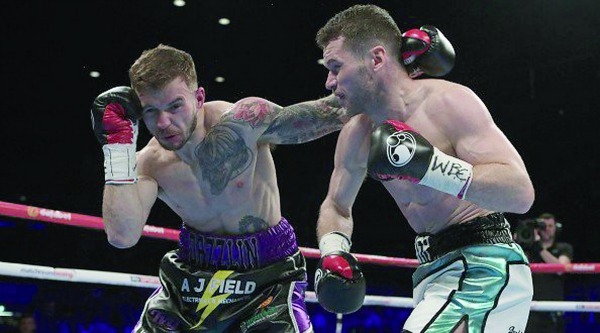 LUKE Keeler has been handed the chance to take a massive step up the ranks of world boxing after it was confirmed that he will fight Tom Doran for an Inter-Continental title in Liverpool’s Echo Arena on April 2.

On the bill that will be headlined by Callum Smith’s clash with Hadillah Mohoumadi, the bout will also provide the Ballyfermot middleweight with the opportunity to exact revenge on the British man for the defeat he inflicted on him in the semi finals of Prizefighter in February of last year.

It remains the only blemish on Keeler’s professional career to date with the Dubliner having won all ten of his other pro outings, including his most recent against England’s Adam Jones in Birmingham only last Saturday.

The fact that he was forced to fight Doran with a hand injury he had sustained in his previous bout against Luke Crowcroft earlier that same day leads many to believe that Keeler will turn the tables on his opponent next month.

Relishing the challenge ahead, Keeler told The Echo “This is a life-changing opportunity for me and it’s a great chance for me to avenge that loss in Prizefighter.

“This fight will put me into the top ten and I’ll have the full backing of Matchroom. You can see how well they promote their boxers and get them title fights.

“I fought him [Doran] in the semi finals of Prizefighter with broken ligaments in my hand and I still only lost by a point.

“This time I’ll beat him. I learned more from that loss than I did from five or six of my previous fights.
“He’s 16 and 0 now, but I know his style and I’ve come on so much since then.

“I’m just after a good win myself at the weekend. I won every round and it was a good workout for me.

“I’m going to be heading to Boston. Some of the lads like Stephen Ormond are fighting there and I’ll be getting in some good sparring while I’m over there” he added.