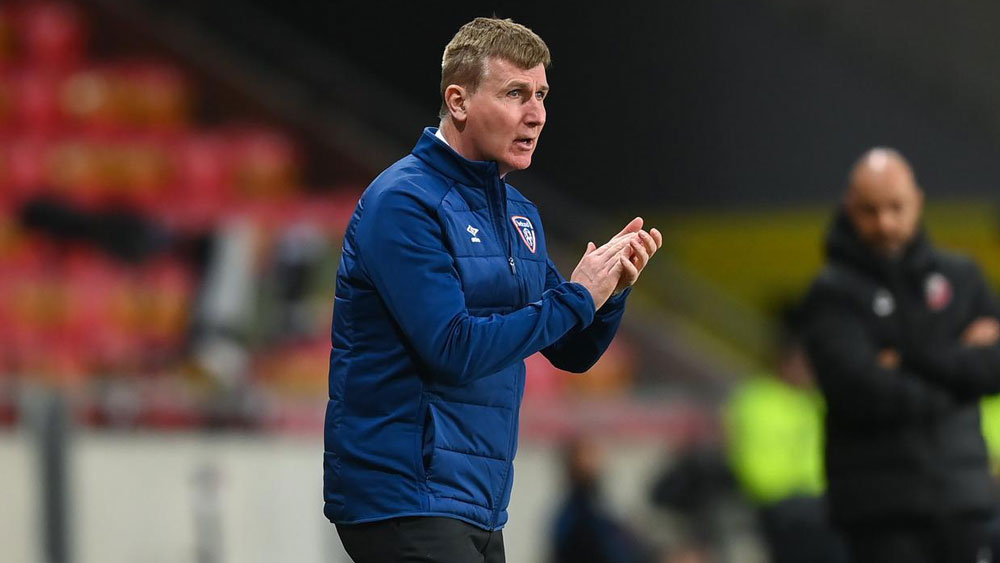 Kenny’s Ireland come away with draw in Portugal showdown

The Republic of Ireland men’s national team produced another gutsy performance in front of a packed Aviva Stadium this evening to secure a commendable 0-0 draw with Portugal in Group A of the FIFA World Cup qualifiers.

Despite being blessed with quality throughout their side – albeit some players were missing with one eye on a crunch game against Serbia on Sunday – the Portuguese weren’t able to unlock a stern Irish rearguard.

This result means Tallaght man Stephen Kenny has lost just one of his last nine games in charge of the Boys In Green and he will be hoping to extend this run when they round off their campaign away to Luxembourg this weekend.

For the sixth competitive game in succession, Firhouse teenager Gavin Bazunu was Kenny’s goalkeeper of choice.

He was joined in the starting line-up by Drimnagh native Enda Stevens, while former St Patrick’s Athletic footballer Jamie McGrath was deployed in an advanced front-three role.

Despite enjoying the majority of possession throughout the opening period, Portugal were struggling to break down their stubborn opponents.

Robinson’s curling effort just past the first-quarter mark kept Rui Patricio on his toes, albeit it was at a comfortable height for the Roma number one.

Chiedozie Ogbene later headed off-target from a Robinson delivery, but the sides were ultimately inseparable at the break.

Robinson and Ogbene continued to cause problems for the Portuguese back-four on the resumption, but their opponents were perilously close to breaking the deadlock on 67 minutes.

Cristiano Ronaldo rose superbly to meet Andre Silva’s cross from the right-wing, but – to the surprise of virtually everyone in attendance – his header drifted agonisingly past the left-hand post.

Following this let-off, Stevens almost bagged his first international goal when creeping into the box with 14 minutes remaining.

He fired over off his weaker right foot, but Ireland were given a timely boost when Pepe was dismissed for a second yellow card offence.

This set up a tense finale, with Ireland pushing hard for a winning goal in the closing moments.

Conor Hourihane did have the ball in the net deep into stoppage-time, but the referee had already blown his whistle for a foul by debutant Will Keane on Patricio.

Ronaldo almost claimed a 96th-minute clincher against Ireland for a second time in this group, but Bazunu saved to ensure his team came away with a share of the spoils.