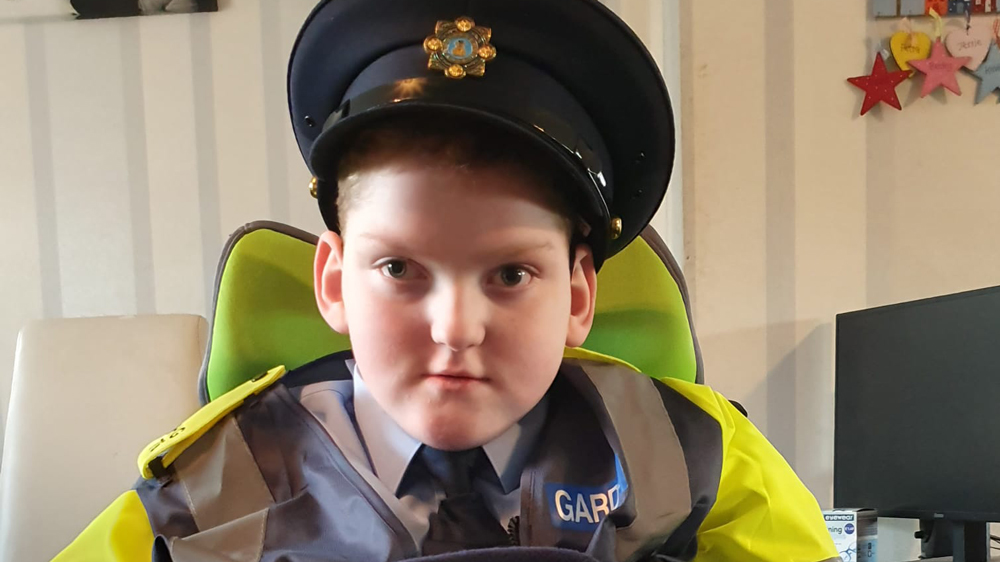 Kevin becomes the newest honorary recruit in the Gardai

A YOUNG boy battling a life-limiting medical condition became the newest honorary recruit of An Garda Siochana when he was presented with his Garda uniform.

Kevin Lindsay (12) was presented with the uniform by Garda Maeve, Garda Keith and Reserve Garda Brian from the Community Policing Unit in Clondalkin Garda Station on November 29 at his home in Cuthbert’s Meadow, Clondalkin.

Kevin has spastic quadriplegic, cerebral palsy, epilepsy and renal calculi, is non-verbal and has to be fed via a peg tube.

Last year, Little Blue Heroes got in contact with Kevin’s special needs assistant after seeing a GoFundMe page which was set up to raise money for a wheelchair-adapted vehicle.

Due to ongoing restrictions in July last year, Gardai conducted a drive by Kevin’s home to mark the occasion – presenting him with a special ‘honorary garda’ hat.

Kevin’s dad, Dave Rutledge, said that it was a “proud day” for him to see Kevin become an honorary Garda and presented with his uniform.

“It was a very proud day, and it was wonderful,” said Kevin. “The gardai themselves were lovely, they brought him out to the car and got a few pictures with the car as well. He absolutely loved it – it is such a great thing to do.

“It is pretty much a replica of a Garda uniform and Garda hat with the badge and all on it, the only difference is that the badge has a Little Blue Heroes symbol instead of the Garda crest,” Kevin explained.

“They presented him with his own uniform, and he has his own individual number which all the honorary Gardai have. The other thing that they do is if heaven forbid something happened to the child, they retire the number, and it is never used again.”

The official Little Blue Heroes ceremony, which is set to take place at Clondalkin Garda Station to welcome the newest honorary Gardai, is due to take place in the coming months but a date has not yet been set due to concern surrounding Covid-19 figures.

“Obviously everything got delayed over time with Covid, but we will have a big day when he is presented with his certificate by the Superintendent at Clondalkin Garda Station,” added Kevin.

“Even when we look at all of the other honorary Garda, it is something which some people might think is small, but it is actually very big to them.”