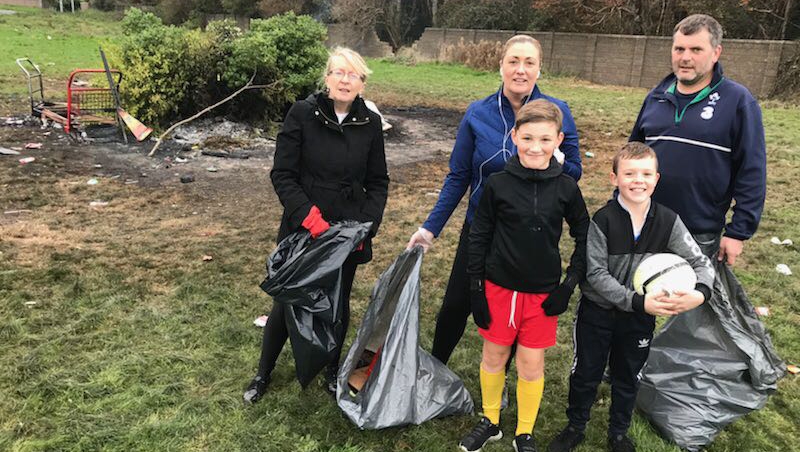 The community of Kilnamanagh turned a negative story into a positive, after parents and volunteers cleaned-up Kilnamanagh AFC’s training pitches, which were destroyed by fire and dumping on Halloween.

As reported by Echo.ie last week, members of Kilnamanagh AFC woke up on November 1 to find their training pitches destroyed by fire and littered with broken bottles, rubbish and a burnt out car.

According to the club, the damage caused on Halloween undid hundreds of hours of hard work invested over the year.

However, in recent days, parents linked with the club and volunteers descended on the pitches and removed all of the debris.

After South Dublin County Council removed the car, New Century Engineering, which is doing work in the area on behalf of Amazon, also dropped by and reinstated the patch of ground destroyed by the burnt out car.

Paddy Ennis of Kilnamanagh AFC today told Echo.ie: “So many people came out and together they cleared up all of the debris on the training areas and the surrounding areas.

“This training area is used by around 400 kids weekly so it’s great that the area has been cleaned up for them.

“New Century came down as well and dug up the area destroyed by the car fire and relayed it with new top soil.

“They really gave us a great dig out and done a great job.”

He added: “Fair play to everyone who helped, it is community spirit at its best.”

Kilnamanagh AFC is now asking South Dublin County Council to help the club safeguard the training area, which is regularly the target of vandalism.

For more on this see this Thursday’s Echo.