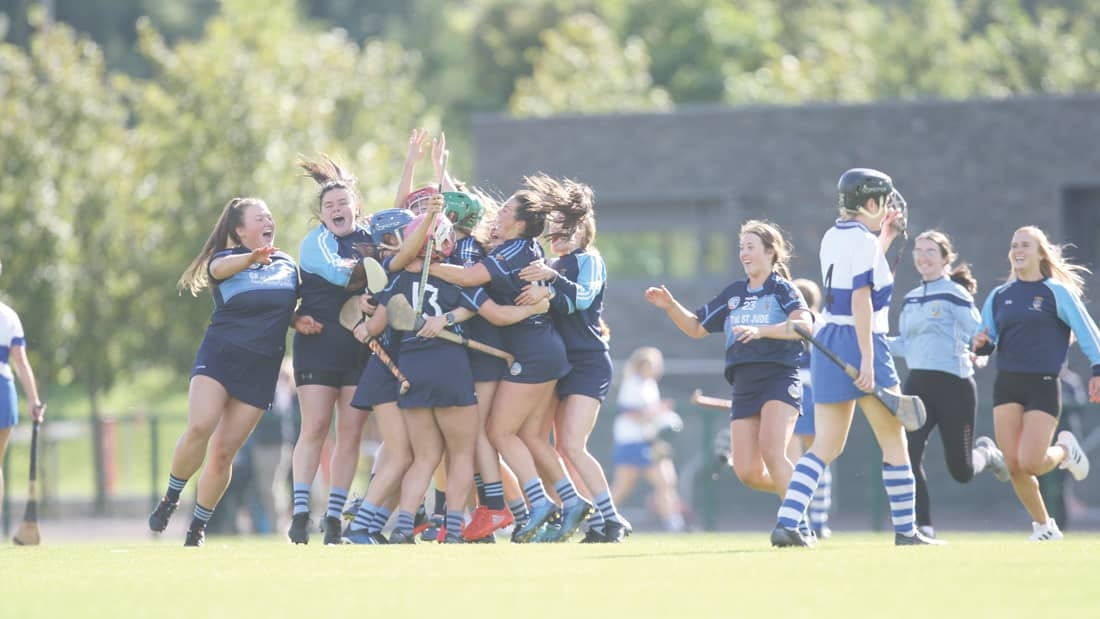 A LATE blitz that featured goals by Leah Butler and goalkeeper Faye McCarthy saw St Jude’s over the line to raise the Dublin Senior One Camogie Championship title at the expense of an impressive St Vincent’s outfit in Abbotstown on Sunday.

Winning out 3-13 to 0-15, the Templeogue side were playing catch-up early on after St Vincents free taker Ali Maguire twice fired over placed balls in the opening two minutes.

Cliodhna Nicoletti opened Jude’s account with a well-taken point from play only to see Grace Gilroy and Anna O’Sullivan respond for the northsiders as they moved 4-1 clear.

Nicoletti and Ellie Young reduced Jude’s arrears to one although Maguire pointed to leave Vincents two points up at the first half water break.

Niamh Gannon got on the scoresheet for Judes before Vincent’s moved 0-7 to 0-4 in front.

But on 23 minutes Aisling Gannon produced a great solo surge up the field, demonstrating great strength and speed before driving the ball home to the net and levelling proceedings.

A further two frees by Ellie Young either side of a Niamh Hetherton point for Vincent’s saw Jude’s head in at the halftime break with the narrowest of advantages, 1-6 to 0-8.

An Aoife Walsh point together with a tremendous free by Young helped keep Jude’s slender lead in tact, but their northside opponents were not about to lose sight of the prize and restored parity thanks in no small measure to the work of Ali Maguire.

And they edged back in front when Ellen McGovern pointed before Young answered with a free.

It was from the dead ball that Vincent’s moved two up courtesy of Maguire, but the momentum shifted decisively in Jude’s favour when Carragh Dawson won a penalty for St Judes and goalkeeper Faye McCarthy, a Senior Camogie All-Star nominee in 2018, rifled the ball to the net to put the Templeogue side back in front by a point with five minutes remaining.

Nicoletti scored and Gannon tagged on points before Leah Butler, who was not long on the pitch, scored a tremendous goal to ensure the title went the way of Jude’s.