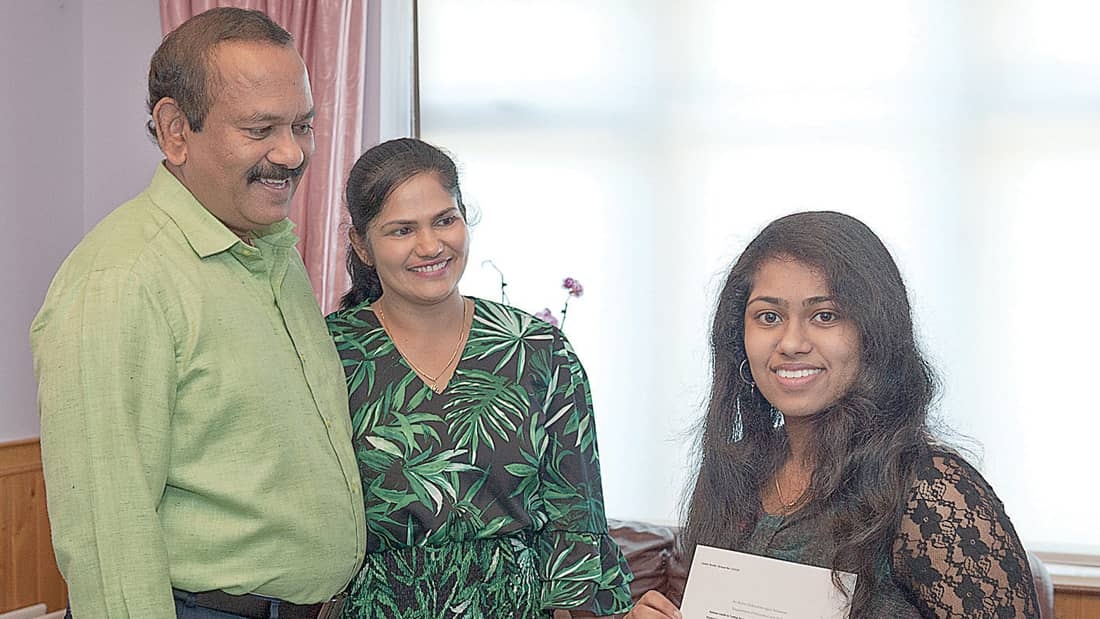 AFTER months of focus and determination through a challenging time, an 18-year-old from Tallaght got the news she had worked so hard for on Monday.

Living in Aylesbury, Brona Pereppadan this week spoke with The Echo about her road to a maximum 625 points in the Leaving Cert, which will allow the teenager to follow her dream into dentistry.

Baby, and Jincy with their daughter Brona

However, despite the massive achivement in netting 520 points, it was 70 points shy of the 590 needed  for dentistry through the CEO system – so, Brona made the decision to repeat the State exam.

Last September, Brona attended the Institute of Education in the city centre to resit sixth year.

“The points system is tough”, Brona told The Echo.

“Having exams at the end of the year entirely depends on how you perform on that one day. It’s a lot of pressure.

“I think ongoing assessment is better, students are working through the year then.”

She added: “I really was nervous during the summer [as I waited for the results], you just never know.

“With the inflation of points you never know what’s going up or not.

“I was just hoping for the result I needed.”

This year was a difficult year for many Leaving Cert students, with Covid-19 measures adding additional stress and uncertainty for those sitting the exams.

“With Covid-19 it was difficult at the beginning but I had a goal in mind so just focused on that”, Brona said.

“There was so much going on but I just tried to ignore it, and kept working.”

After two years of dedication to her dream, Brona achieved the maximum 625 points in the Leaving Cert, and now has her sights set on a five-year college programme at Trinity.

As she takes some time out to relax, Brona encouraged any young person going into sixth year to focus on what they want.

“Always have that goal in mind, and work for that goal”, Brona said.

“It’s also important that you start working for your goal from the beginning [of the year].

Brona’s celebrated her results at home this week with her family, and her dad Baby, who is a Tallaght councillor on South Dublin County Council.