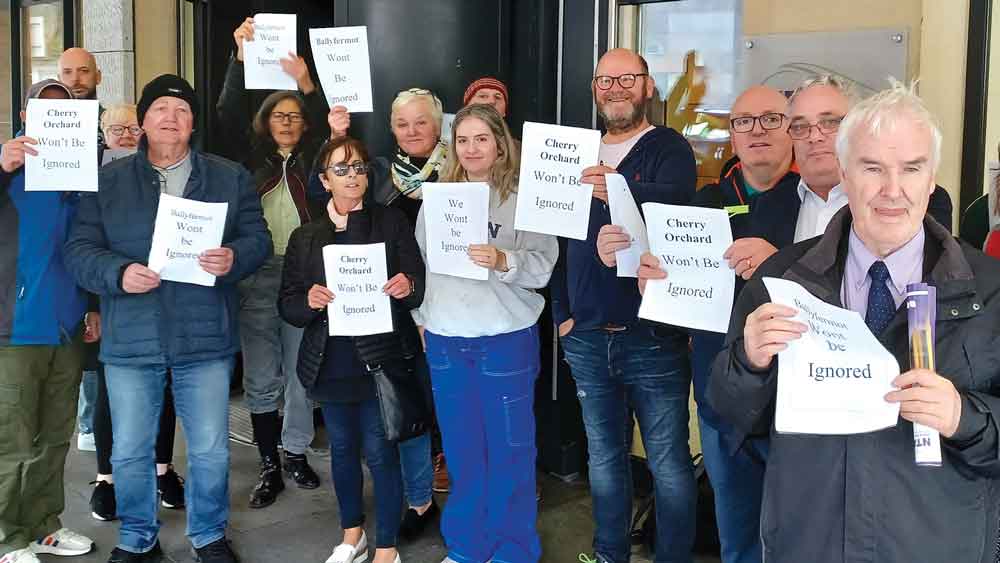 PUBLIC representatives of Ballyfermot went to the head office of the National Transport Authority last week, to hand them a letter outlining residents’ concerns over changes to the bus network.

Phase 4 of BusConnects will see existing bus routes replaced with “Spines”, and radial routes which run with high frequency into the city centre.

However, residents in Ballyfermot fear the replacement of routes 40 and 79/79A with a new G-Spine (G1/G2) and a new number 60 route, will lead to the loss of bus stops on residential roads in lower Ballyfermot and the possibility of buses being full when they arrive on Ballyfermot Road at peak times.

Ballyfermot reps went to the NTA’s head office on Harcourt Lane last week, and by chance, Hugh Creegan, NTA Deputy Chief Executive was coming back to the office, whereupon they handed him the letter.

Cllr Daithi Doolan (SF) said the protest concerns the termination of the of the 79/79a bus service, and a letter requesting a meeting to discuss local concerns was handed over.

Local reps were due to meet the NTA last Thursday, October 13, before reporting back to residents in a public meeting on Friday.

“A key issue if the 79 route, which if they just left alone, there would be no problem,” said De Nortúin.

“But I think they want fast routes into the city centre.

“There is a practicality issue as well for older residents, the number 60 no longer drops passengers off outside Tescos.

“A question mark remains over what changes the NTA are prepared to make.”