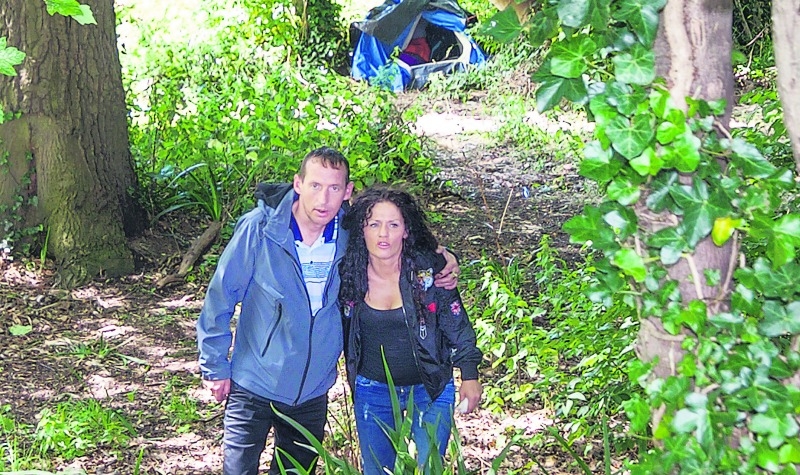 Local couple forced to live under canvas in Phoenix Park

A TALLAGHT woman who is homeless has been forced to live in a tent in the Phoenix Park.

Edel Stirling, a mother of two, has been living in the tent for the past three months with her partner, Jason Vickers.

Edel, who is originally from Rossfield, and Jason, from Ballyfermot, were staying in homeless accommodation in Little Britain Street in the city centre run by Depaul but left after they had concerns about their security.

Edel told The Echo: “We didn’t feel safe there. Things were going missing.”

Previously Edel had lived in Athy in rented accommodation with her two children aged 13 and eight. They moved back to Dublin after her landlord decided to sell the property and Edel’s two children moved in with her mother in Rossfield.

Edel said: “If the children were to stay with me then we would be put up in a hotel. I don’t think that is any way for two children to live, to live in a hotel room. So I would rather they stay with my mother.”

Edel and Jason stayed in friends’ houses before moving into homeless accommodation and then they made the decision to camp in Phoenix Park.

She said: “We didn’t feel safe in the hostel. There were too many drug-users there. As I said before, things were going missing. They threw out my runners. We feel safer living in the tent, but obviously we would love to get housed.”

Edel says she is on the housing list in Kildare and is in the process of getting on the South Dublin County Council Housing List.

The Echo brought Edel’s criticism of the accommodation in Little Britain Street to the attention of Depaul.

A spokes-woman for Depaul told The Echo: “Depaul strives to provide a safe and secure environment for residents in all of our services. Little Britain Street is a night-time-only emergency hostel, accommodating 40 men, 12 women and three couples.

“It also has five high dependency beds for those in need of increased levels of care and monitoring. It is fully staffed with employees and volunteers who are comprehensively trained to support and monitor service users, both for their own, and for other’s safety and peace of mind”.

She added: “Depaul works to ensure a high level of safety across all services. Depaul takes any and all incidents or complaints extremely seriously. We ensure that all of our services operate to a high standard of health and safety. Depaul does not comment on individual cases.”