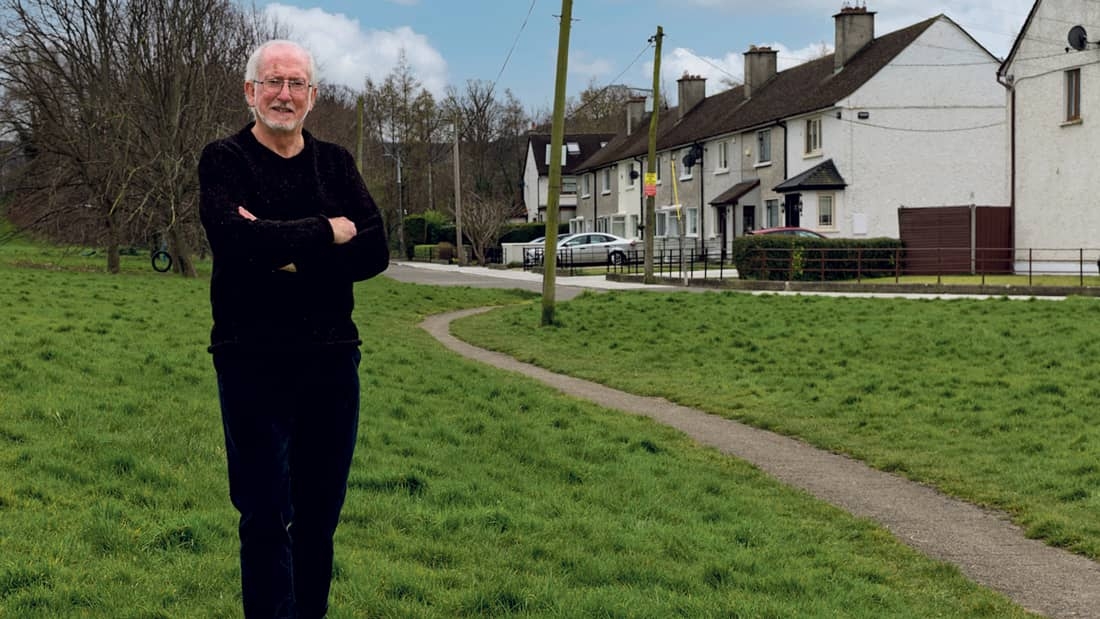 AN idyllic childhood spent growing up in Firhouse, and teenage years spent socialising in Tallaght Village, have given David Kennedy a lifelong interest in and passion for all things Tallaght.

David’s family has strong roots in the area, stretching back to a time when Tallaght was a rural village on the outskirts of Dublin.

David was born in his grandparents’ house in Colberts Fort, Belgard Road, where he lived until the age of two – at which point his parents were allocated a house in Mount Carmel Park in Firhouse.

The second eldest of five children, David has happy memories of growing up alongside his siblings, Brenda, Paul, Margaret and Deirdre, and his friends, and taking advantage of what the area had to offer.

“We spent our summers in the Dodder,” he remembered. “We learned how to swim and fish in the Dodder – it was an amazing place to grow up in at that time.

“Then, when I was nine or ten, I started getting the bus, the 49, to the boys’ club in Tallaght Village.

“It was behind where the post office used to be, beside The Dragon Inn, where the Tallaght Centre for the Unemployed is now.

“Everyone in the area knew everyone, even in the club. We had that freedom, it was terrific.”

David finished his primary education at Firhouse National School at age 11 and started attending Synge Street CBS, which gave him the experience of city life.

“I had the best of both worlds,” he said. “I’d go into town for lunch, because most of us lived too far away to go back home for lunch, so we’d go to St Stephen’s Green.

“Then I’d come home, and I’d be back in the countryside again.”

After completing his Leaving Cert, David began working at Clondalkin Paper Mills, where his father had worked for 34 years before retiring, and he got his first taste of office work. It led him down an unexpected career path.

“I got an office-based job in the production department, and in my second year working there they were looking for staff to train as computer programmers,” David explained.

David was selected and received training in computer programming, and worked as a computer programmer for various companies for 15 years, as computer technology was rapidly developing as a mainstay of work environments.

“It was a great job because it was a challenge, and there was always a deadline.

“I developed systems for some local newspapers around the country, so that gave me a connection to the newspaper industry at a local level.”

David has been involved in the Tallaght community throughout his life, and he closely followed the work of, and contributed to, a magazine called the Tallaght Magazine, that was run by local man Eddie Brennan for seven years before it ceased publication in 1978.

Spotting a gap in the market, and watching the area develop at a rapid pace, David, then aged 29, joined forces with Mervyn Ennis and Dominic Finnegan, and the trio produced the first edition of the Tallaght Echo on May 1, 1980.

“I started The Echo because I had passion for the area, and there was a need for an area like this, that was growing so quickly, to have a source of local information,” he reflected.

For the first few years of the newspaper, David, who was raising a young family with his wife Liz, maintained his day job as a computer programmer, before quitting in 1983 to work full-time as the editor of The Echo.

“My family probably all thought I was nuts for giving up my programming job,” said David.

“You’d hardly call it irresponsible, but with a young family and a mortgage, it wasn’t a well thought out financial decision…but I have no regrets.”

After a difficult first few years, the newspaper started to gain a foothold in the community and went from strength to strength, and later grew to cover the surrounding areas of Clondalkin, Ballyfermot and Lucan.

The Kennedys decided to sell off the paper to Johnston Press in 2005, before ultimately buying it back five years later, when an editorial was published proudly announcing that David was back at the helm of the paper.

“It was a hugely difficult decision to sell, and every week I’d change my mind about it,” he said.

“About a month after we sold the paper, I had my first conversation with the new owner, and I asked him, ‘When can I buy it back?’”

Looking ahead at the ever-evolving news and media industry, David said: “It’s a great business to be in.

“The format for how news is delivered is evolving, but news will always be required.”

NEWER POSTEmily 7: Brothers to feature on documentary ‘My Tribe’
OLDER POSTSeven friends will run 300km each in support of young Kian