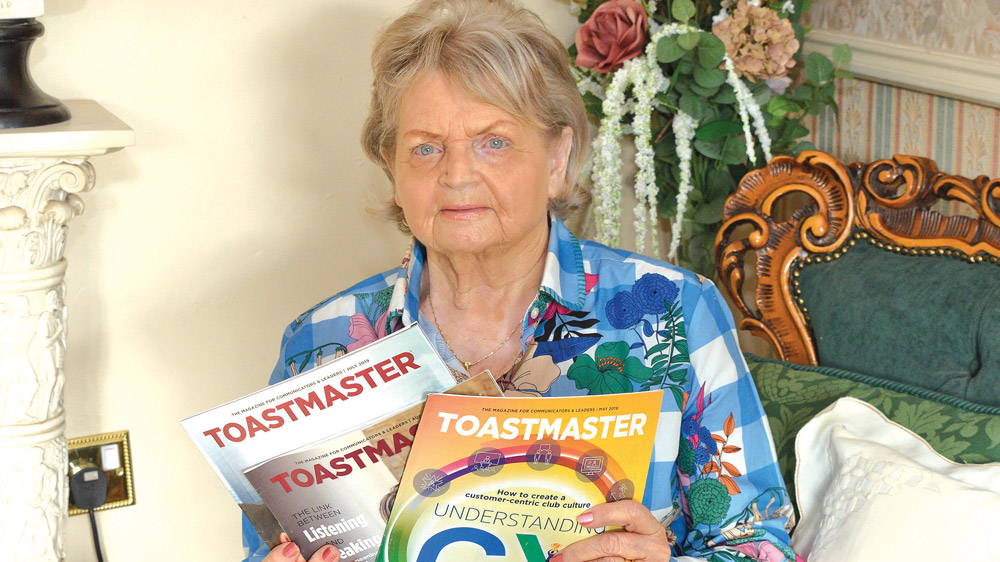 HAVING recently turned 80, Clonburris resident Tina Stynes is about to embark on the next chapter of her colourful life – reaching Level 5 at Clondalkin Toastmasters.

Tina was encouraged to go along to a Toastmasters night in town over 20 years ago by her daughter-in-law Fiona. She liked the event, but searched one out closer to home, and found a Clondalkin group.

“I never looked back, they are the greatest people I ever met,” said Tina.

“I am on Level 4, but hope to be on Level 5 before Christmas. I write my own speeches, incorporating aspects of my own life, and then making a script.”

Formed in the USA in 1924, the International Toastmasters has helped hundreds of thousands of people in 145 countries, to develop skills and confidence to express themselves effectively in any situation.

“It is public speaking, you have to try and keep the English moving along naturally. It helps keep my brain going,” said Tina.

“But it is not just about speaking, it is also about listening. A lot of people don’t listen. At my group, it is great. Even if you don’t do the job right, they still clap and tell you they like it!

“We meet every two weeks at the Maldron Hotel in Newlands Cross. It is great support, and provides a sense of belonging and a fulfilment. There has never been an evening where I didn’t learn something new.” 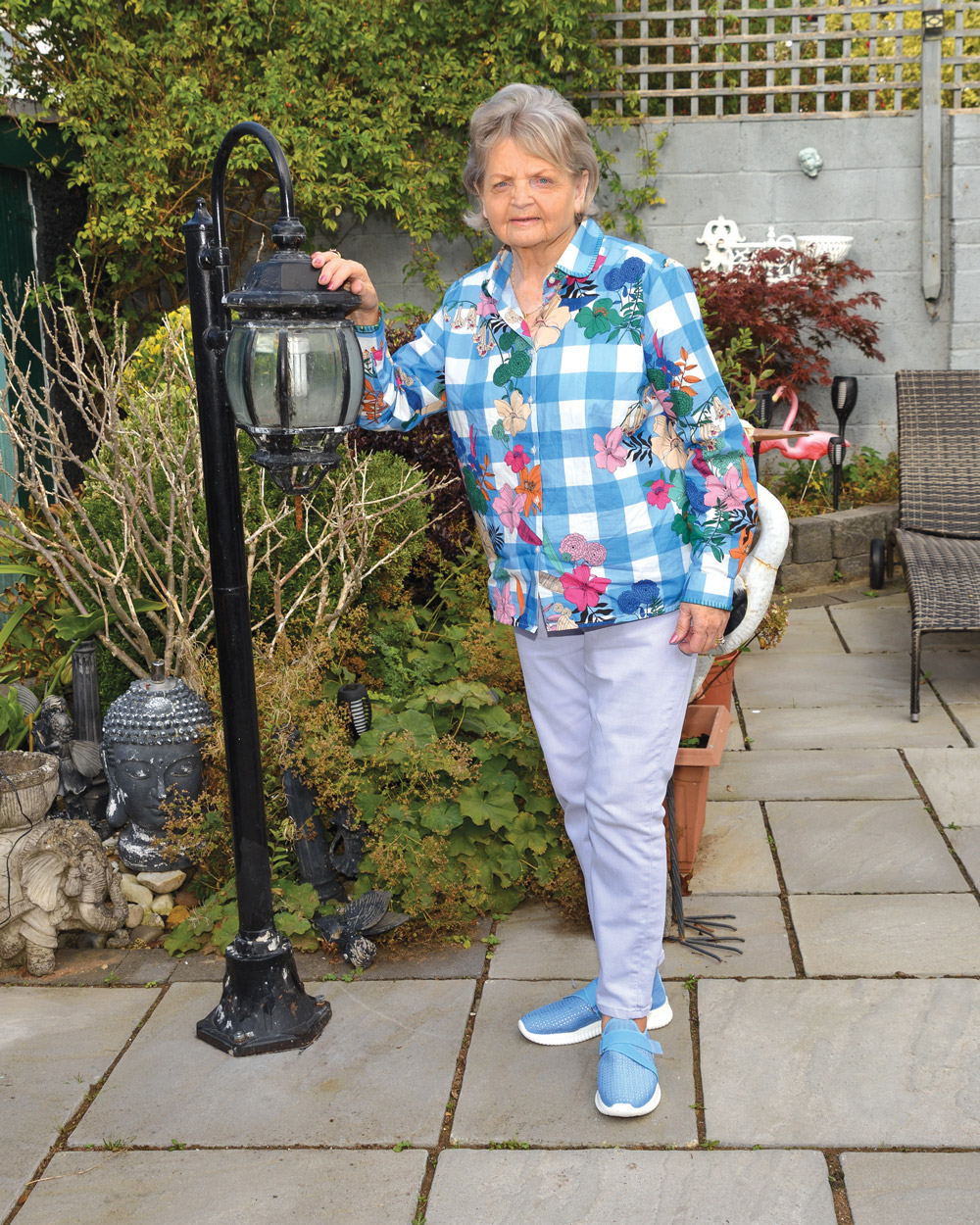 Tina Stynes from Clonburris, who recently turned 80, discovered Toastmasters over 20 years and is now on Level 4

Mary Conlon, vice president of education in Clondalkin Toastmasters, said Tina’s educational progress in the club has been inspiring.

“Tina has worked diligently over the years on her own development and on behalf of the club, through service on the committee. Her warm and encouraging manner captures everyone she meets,” said Mary.

“The education programme in Toastmasters comprises 5 Levels, each of which comprises several individual speech projects. In the current year, Tina has completed three Levels in the programme, which entitles her to the rare and prestigious Triple Crown award.”

The awards are the latest in a somewhat unorthodox life and career for Tina.

Incredibly, she is a mother of seven boys, and no girls, lamenting with a giggle “I tried”.

After giving birth to her last two boys (twins), she recalled the doctor’s approach to delivering the news.

“If you could have seen the face of the doctor. He was kind of scared to tell me. Beforehand, he was talking and said ‘maybe it would be a good thing if it is boys’. He was trying to soften the blow,” chuckled Tina.

During the Tuppperware craze in the late 1960/70s, Tina had 26 women she recruited, working for her and it went “fantastic – we got a lot of work done”.

Then, at the age of 54, Tina went to the royal palace in Saudi Arabia, teaching English and Maths to the children of King Abdulaziz bin Bandar Al Saud in the mid-90s. 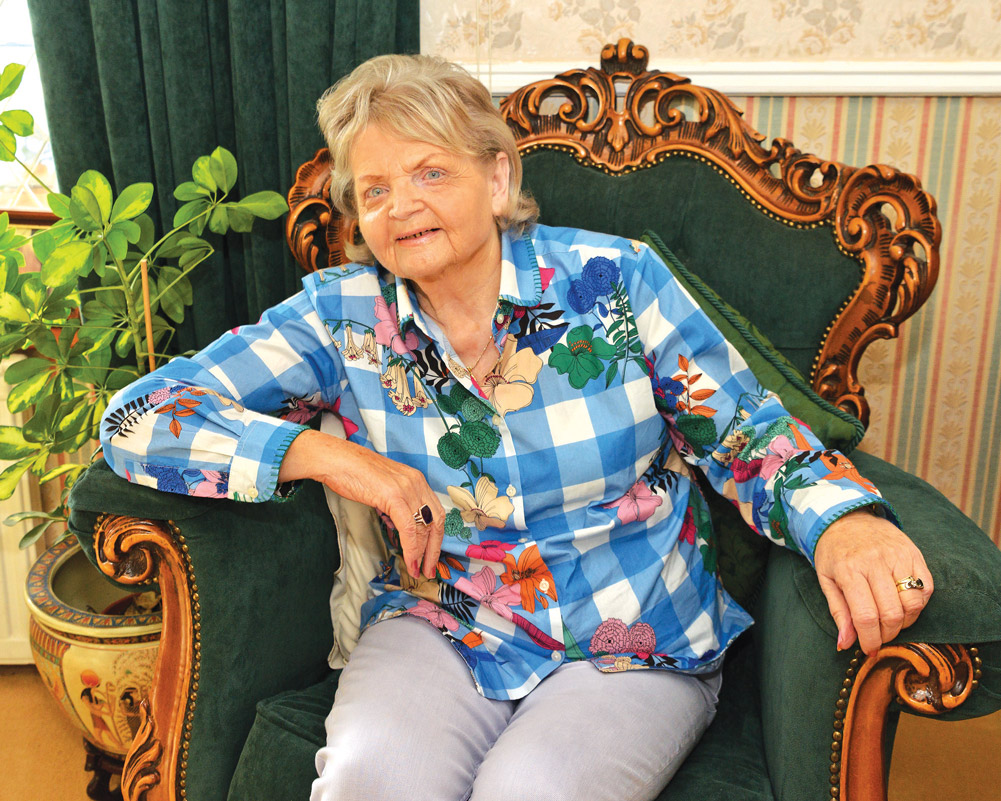 “I took a year off to go there. I was treated so well, everywhere you went it was VIP. After a year I wanted to go home, but they wanted me to stay and I did for another year. They still wanted me to stay but I told them I have a family of my own, my youngest were 17/18 at the time. They made it worth my while,” she said.

Upon returning to Dublin, Tina bought a house in Clonburris.

She lives there today with her husband Paddy Stynes, a former steel erector.

Unfortunately, Paddy suffered serious injuries when a motorbike crashed into him while he was out walking one morning – forcing him to retire from that line of work which routinely saw him scale massive heights.

“It was tough on him, and tough on the kids, and us all,” said Tina, of the accident. Paddy suffered 11 breaks in his shin and a broken back, which led to years of rehab.

Through her work in Clonburris parish, Tina talked to Fr Finn, and Paddy had a job helping out at Clonburris school, where he would go on to be their caretaker for 24 years.

“He only retired two years ago from Clonburris school, but he is still doing really well,” said Tina. 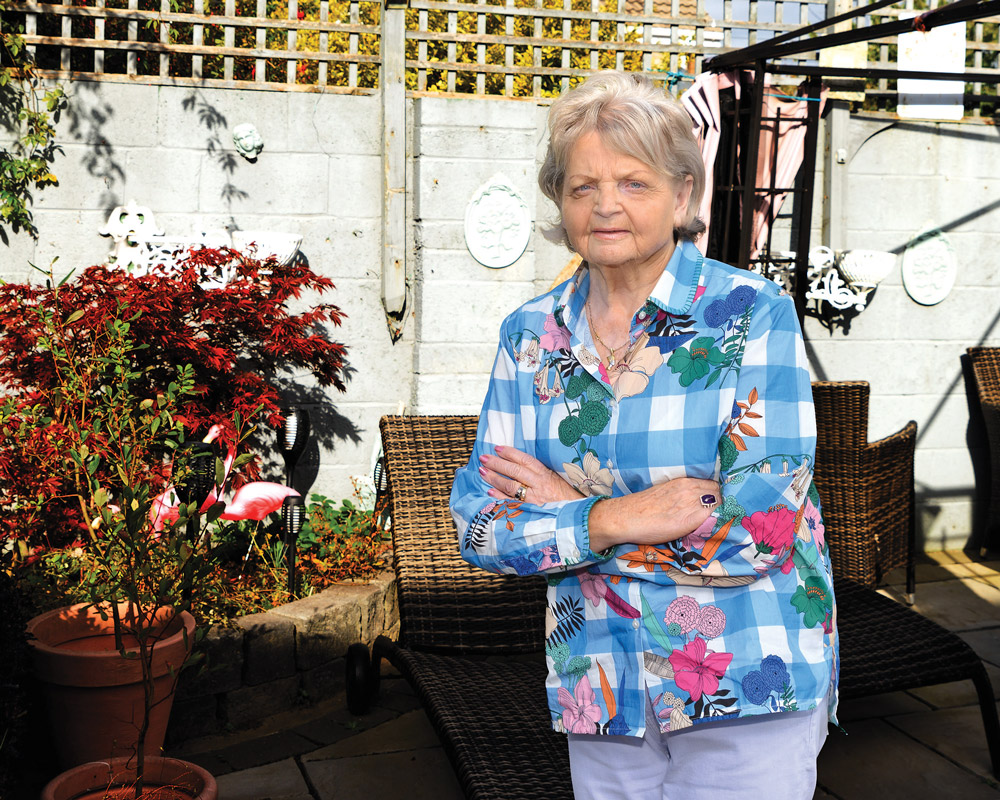 After her return from the royal palace in the Gulf state, Tina trained as a reflexologist.

Always on the lookout for a new challenge, the impromptu visit to the Toastmasters with her daughter in law provided her with the perfect foil for her talents.

“We are always looking for new members, we never refuse anyone. It would be especially good to see the youth, aged 18-20, to come along and think of their career. A lot of communicating is done in the pub. I don’t knock the pub, but it is not the same thing.

“Social media is destroying the English language. Groups like this help to keep it going.”