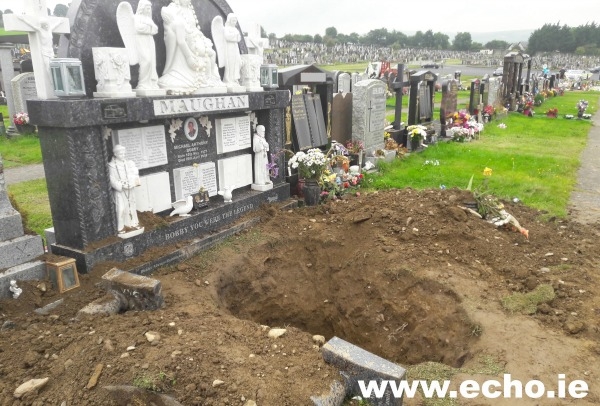 Tallaght family’s grave desecrated in a “cowardly” and “horrendous” act

A TALLAGHT family has today made an urgent appeal to the community for support and information after the grave of one of their loved ones was desecrated in a “cowardly” and “horrendous” act.

There were scenes of devastation in Bohernabreena Cemetery today, August 18, when Joe and Helen Maughan from Killinarden witnessed the horrific damage done to the resting place of their son Micheal Anthony Bobby, known as Bobby, who passed away in 2008 from meningitis.

Joe and Helen are the parents of missing Tallaght man Willie Maughan (34) who disappeared on April 14, 2015 with his girlfriend Ana Varslavane (21), with the couple last seen in Gormanstown.

Since the disappearance, Joe has continuously campaigned for justice for missing Willie and, believing that his son and girlfriend were murdered, has issued ongoing appeals for information on where the remains of the young couple lie.

Joe, who is well known through his work with Sacred Heart FC in Killinarden and his volunteering efforts across the wider community, told The Echo: “I believe Bobby’s grave was targeted because I keep Willie and Ana’s disappearance in the spotlight, I keep it in the media, and continue to fight for justice.

“What these cowards have done has made me sick but it makes me stronger and I’ll never ever give up my fight for justice.”

Joe added: “It’s none of my businesses what people do with their lives but desecrating a grave like this is the lowest of the low – and I couldn’t believe it when the council rang me at 11am this morning to tell me what had happened.

“I am asking people in communities to support me and my family on this, we don’t deserve this and have a right to seek justice for our son and his girlfriend.

“Communities should stand by my family and other families seeking justice and if anybody has information or who may have saw anything suspicious in the Bohernabreena area last night or this morning to come forward.”

A Garda forensic team sealed off the grave earlier today and removed a number of items believed to have been left by those responsible for the desecration.

Alongside the forensic team and members of the Maughan family, Tallaght Garda, graveyard staff, local councillors and members of South Dublin County Council were also present.

Tallaght South Sinn Fein councillor Cathal King confirmed to The Echo that the council is offering support to the Maughan family and will re-instate the grave.

He said: “In all of my 13 years as a councillor I’ve never come across anything this horrendous, nothing compares to this.

“It’s disgusting and may be the straw that breaks the camel’s back, and encourages individuals or communities to speak out.

“Hopefully the gardai will put more effort into this [case] as well, it has gone too far.”

Tallaght South Sinn Fein councillor Dermot Richardson told The Echo: “This family buried their son eight years ago and here they are, back up around his open grave – it’s traumatising.

“Anybody with information on this crime is encouraged to contact their local Garda station or a councillor.

“Families fighting for justice need more support from the public and from members of An Garda Siochana – and we are going to seek a meeting for the Maughan family with the Garda Commissioner over this case and the impact it has had on the family.”

When contacted by The Echo, a Garda spokesman said that they have been aware of the incident and are currently investigating the complaint and appealing for anybody with information to come forward.