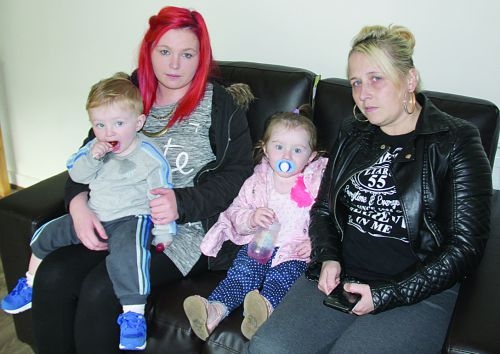 HOMELESS Tallaght families were last weekend left living in apartments that were flooded with raw sewage, despite reporting the health and safety hazard immediately to the council and relevant housing authority.

Mother-of-six Tammy Cosgrove and mother-of-two Lisa O’Grady were both placed in a new 65-unit council project in Tallaght Cross, which is providing supported, temporary accommodation for families while they secure their own permanent home.

However, last weekend a number of reported plumbing issues with some of the units reached crisis point, when Tammy and Lisa’s apartments were flooded with the complex’s flushed toilet water.

Tammy told The Echo: “I came home last Friday afternoon to find my bath full of human waste and water and I called TUATH [the approved housing authority running the project on behalf of the council] and was told that there was basically nothing they could do until Monday.

“The toilet then started to fill up and the sinks. The smell was unreal, so I had to send my children to stay with friends and family – I couldn’t expose them to the dangers of living in those conditions.

“It was absolutely disgusting and it’s not right to expect people to live in these conditions just because they are homeless – it was such a stressful and upsetting situation.”

She added: “Since Tuesday [of this week] the council has placed us in another unit in Tallaght Cross until our apartment is sorted and I’m really grateful for that, but still very upset that they expected a family to live with such a serious health and safety issue.”

Lisa O’Grady was placed in Tallaght Cross on July 7 and has been experiencing plumbing issues since day one.

“There was a leak in my bathroom on the first night that we moved in and I was left with two kids and no water for two weeks while I waited for the problem to be fixed.

“After getting the first leak repaired there was a second leak which was considerably worse and resulted in flushed toilet water flowing up from under the floor boards.

“The smell was unbearable, I was living in sewage, and I had to use all of my towels and linen to try and soak the water.

“Worst of all my eldest daughter has been sick lately and woke one morning with a rash covering her body.

“I cannot say that her illness is down to dirty water in the apartment, but it only flared since we arrived here.”

She added: “An environmental officer told me that we couldn’t stay in the apartment on Monday, which meant we were homeless Monday night until the council were able to find us alternative accommodation on Tuesday.”

A council spokesman told The Echo: “There was a blockage caused by a bottle stuffed into a toilet.

“The matter has been resolved and temporary alternative accommodation has been sourced by the management company for the tenants affected.”

When asked if a full examination of the complex’s plumbing system was being carried out, the council said: “We understand that this is a one-off incident.”

The 65-units at Tallaght Cross are run by TUATH, the approved housing authority on behalf of South Dublin County Council, with Focus Ireland providing support, information and advice for tenants.

LATEST NEWS: Man who died could have been accessing house for shelter…