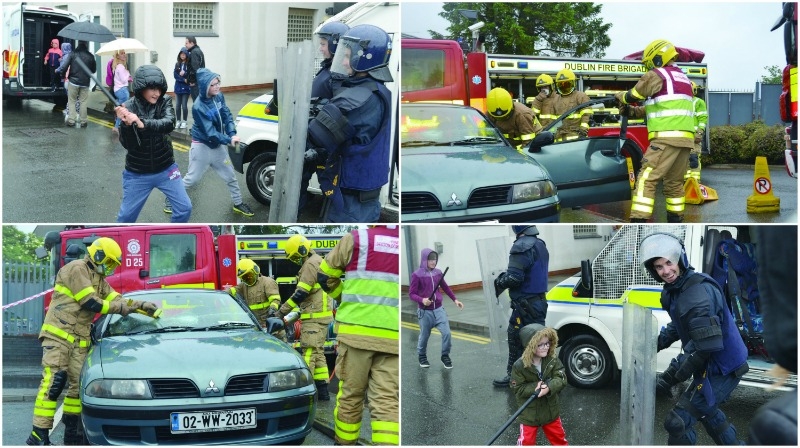 Local Gardai and firefighters demonstrate their prowess to the public

Visitors enjoyed a range of exciting demonstrations with gardai and Dublin Fire Brigade personnel in the courtyard.

Gardai also brought visitors on a guided tour of the station to see the public offices, the CCTV camera control area, and the recently refurbished custody suite.

The highlight of the day was the presentations for the garda schoolchildren’s art competition, which is run by Clondalkin Garda Station for fifth class pupils of primary schools in Clondalkin.

Minister for Justice France Fitzgerald presented 10 awards to children who took part in the competition – the theme of which was pictures which reflected children’s view of gardai in the community.

A special commendation was presented by the Minister to former garda reserve Tom Byrne.

Mr Byrne, from Glencullen, was a Clondalkin garda reserve for eight years and formerly worked in Dublin Fire Brigade for 30 years.

“It was a privilege to present awards to winners of the schools art competition, and to garda reserve Tom Byrne who has retired after eight years service,” said Minister Fitzgerald.

“It was also great to hear about all the services that keep our local community safe, from the public order unit to the over 100 mountain bikes that gardaí use to patrol DMR West.”

Out in the courtyard, a number of children lined up to test the strength of the public order unit, while Dublin Fire Brigade performed a rescue demonstration – cutting open the doors, roof and windows of a car.