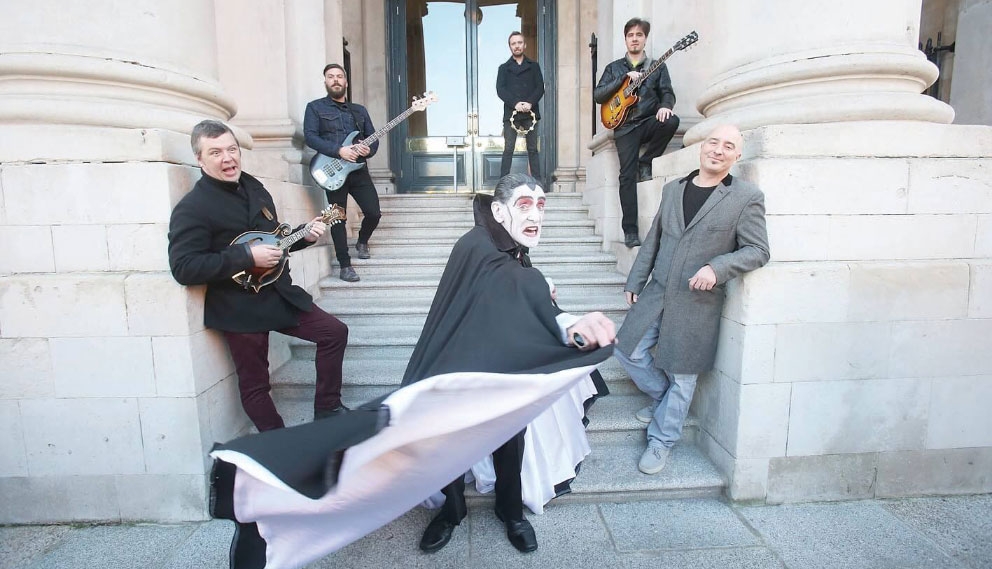 Local heroes been recognised through song

TWO locals are in among 21 of Dublin’s “extraordinary citizens” who were recognised by Lord Mayor of Dublin, Nial Ring, in the Local Heroes project at City Hall on Tuesday.

The Local Heroes project was created by the recently established Dublin City Council Culture Company, where artists met with the local heroes over the past six months to capture their essence and express it through art.

Paddy Drac, aka Paddy Finlay, with The Pale, who wrote a song for him as part of the project

Sister Bernadette Sweeney from Crumlin and Paddy Finlay, better known as Paddy Drac, from Tallaght, have been recognised through songs that have been recorded by established Dublin rock band The Pale as part of the project.

Sr Bernadette is a retired principal of St Agnes’ Primary School in Crumlin, who is well-known in the area for promoting and providing music education for the community in St Agnes’ Community Centre for Music and the Arts.

A youth orchestra was set up by Sr Bernadette, which saw all 400 students supplied with instruments, and since then the orchestra has won numerous awards, and the offerings at the centre have expanded to include a parents’ and grandparents’ orchestra.

Paddy Drac is a Dublin entertainer, who’s a familiar face to many both as a result of his involvement with the St Patrick’s Day Parade in the city centre and for leaving his crypt to entertain the masses at Tallafest every year.

Sr Bernadette with The Pale

The 74-year-old Bawnville resident first donned his ghoulish cloak over 50 years ago, and since then has become a lifeblood of the community and has raised funds for children with special needs.

Speaking at City Hall on Tuesday, Lord Mayor Nial Ring said: “This is a very special event honouring, in such a creative way, just some of the many great people across our city, and I am privileged to be a part of it.

“It is the people of Dublin that make this city great and this project perfectly demonstrates that.

“The dedication to fellow citizens and passion for their community of these Local Heroes, and the creativity and imagination of these artists, all contribute to making our city a great place to live.

“This project has not only produced a unique set of artworks, but has allowed those involved to share stories, know each other better and meet new people from different walks of life with who they share this wonderful city with.”