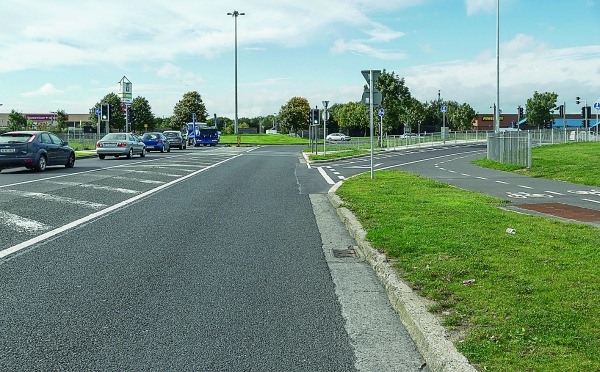 A GOOD Samaritan helped an elderly lady involved in a serious car crash – staying with her and performing first aid while waiting for emergency services to arrive.

The incident occurred on the new slip road onto Coldcut Road from Fonthill Road a few weeks ago – a pensioner’s car and a van collided, resulting in both vehicles being wrote off.

Greenfort resident Bryan Murphy (32) lives close by. On hearing the crash, he rushed to the scene and assisted Lucan pensioner Catherine Dunne.

Bryan, a member of the Dublin Fire Brigade (DFB) extension training unit, confesses he was just “in the right place at the right time.”

“It was a fairly major accident, I heard the noise around 2pm, saw the mayhem and ran across,” said Bryan.

“I tried to open the front doors of the car, but couldn’t, and had to go in through the back on the passenger side. There was smoke coming from the radiators of both vehicles.”

Using his training with DFB, Bryan ensured that the woman did not suffer any further damage, and reassured her.

He continued: “I kept her head as straight as possible and told her the fire brigade was on the way. She was shook up, and her foot was stuck. There can be a danger to the spine in accidents like this. Other cars were beeping on the road, which is unbelievable really.”

The Dunne family posted a public thank-you to Bryan in the aftermath of the incident, praising “a gent who helped my mother in a crash on the Fonthill Road”.

The post said Murphy kept their mother still “until he was happy to be removed by the fire crew who all knew him – she never got his full name or a chance to thank him.”

The new slip road was blasted by both the family and Mr Murphy, as highly dangerous.

“You have to turn your head to see if anything is coming,” said Bryan.

“When the woman pulled out, the van hit her and must have built up quite a bit of speed. I’ve heard of many accidents since the council put in that road.”

NEWER POSTMan on ‘serious assault’ charge to face trial in the Circuit Court
OLDER POSTTree of Hope and €100,000 play area in Tallaght damaged by teenage vandals