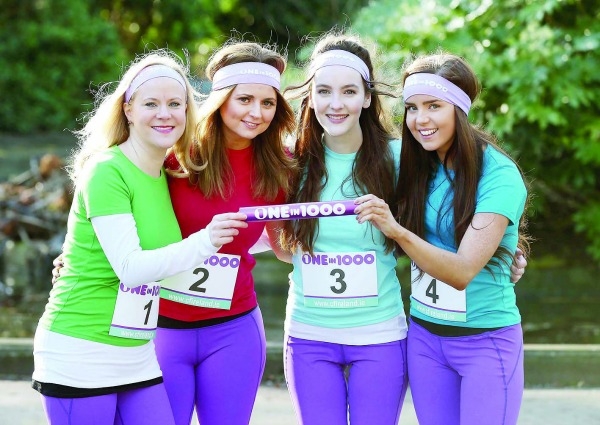 LUCAN resident Bevin Murphy helped to launch Cystic Fibrosis Ireland's campaign to recruit 1,000 women to take part on behalf of the charity in this year's Women's Mini Marathon which will take place in June.

Bevin spoke to The Echo about her experience with cystic fibrosis and the importance of taking part in the marathon.

She said: “I was diagnosed with cystic fibrosis when I was six months old, so I really don’t know any different.

“On both good days and bad days, I spend a lot of time keeping myself feeling good. On a good day, that includes five hours of taking care of myself.

“I’m currently in DBS studying a post grad degree in psychology, but I have to work extra hard at times as I often miss college due to spending a week or two in hospital receiving antibiotics.

“Every day is different. Some days I feel great and others I struggle to walk up the stairs. I have to take two hours every morning and every evening taking my nebulisers and doing physio, and I also have to do physio each afternoon.

“I started working with Cystic Fibrosis Ireland a while ago, as I wanted to raise awareness as there is lots that need to be done for CF.

“I got involved with the campaign for the Women’s Mini Marathon as I wanted to highlight the talk that needs to happen around the new drug for CF and to encourage other people with CF and those looking to keep healthy to take part for a good cause.

“Fitness is so important for people with CF, and there is so much that needs to be done for CF treatment including the supply of equipment and the potential life saving drug out there.

“I walked the marathon in 2013 and since then I’ve been training for this year’s women’s mini marathon, with the hope I can run it even if it’s just for a few minutes.

“I encourage people to get involved, and if you’re on the fence about who to support, support Cystic Fibrosis Ireland. Whether it’s 10 minutes or an hour of fitness, it’s good for you.”

Women interested in signing up for One in 1,000 can visit www.cfireland.ie, telephone LoCall 1890 311 211 or email fundraising@cfireland.ie.