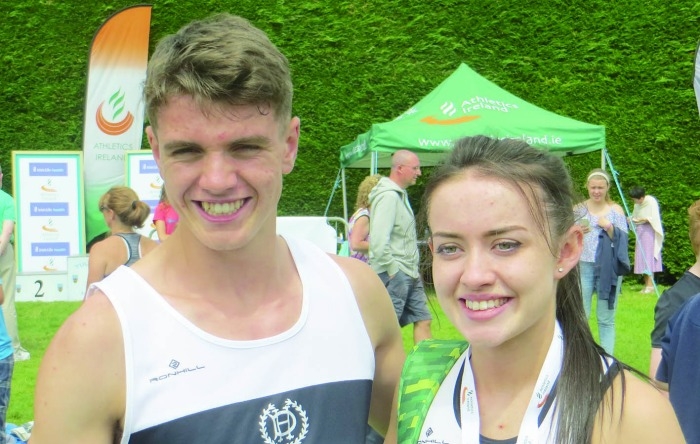 Lynch and O’Loughlin do it again

AOIFE Lynch and Louis O’Loughlin did it again for Donore Harriers on Day Three of the National Juvenile Track & Field Championships in Tullamore as both topped their respective divisions.

Lynch (24.98) was several yards clear of her Irish international team-mate Aoife Cloke-Rochford (25.47) of Bree AC, when she crossed the line in the final of the Under 19 Girls 200m.

Yet Shay McEvoy (4.06.32) of Kilkenny City Harriers moved up onto his shoulder when he passed the bell with just 400m remaining.

O’Loughlin reacted by moving up the gears over the last lap to capture his 14th national title in less than three years.

In the process, he knocked eight seconds of his previous best time as McEvoy finished runner-up with Luke Brennan (4.08.92) of Waterford AC third.

Having had opening throws of 32m and 34m, he fouled his next three attempts, before letting fly beyond the 40m line with his final effort.

And to cap a good day for the club, a further two bronze medal wins were recorded.

In a keenly contested Under 18 Girls Triple Jump Andie Maguire (10.20m) finished in third place while Cormac Yalloway (33.05m), competing in his first national championship, took bronze in the Under 17 Boys Hammer.

Newcomer Robin Sweeney (41.37), demonstrated plenty of potential when placing seventh in her Heat of the Under 15 Girls 250m Hurdles.

Max Carey, finished fourth in the Under 18 Boys Pole Vault with a best jump of 3.30m and Caoimhe Mackey and Clodagh Martin placed sixth and seventh respectively in the Under 19 Girls 400m Hurdles.

Lara O’Byrne placed fourth in both the Under 18 Girls Javelin and High Jump, beating her previous best mark in the former by four metres to record a new best throw of 31.23m.

O’Byrne also recorded a best jump of 1.50m in the High Jump as she finished the championships with three fourth placings and a bronze in the Long Jump.