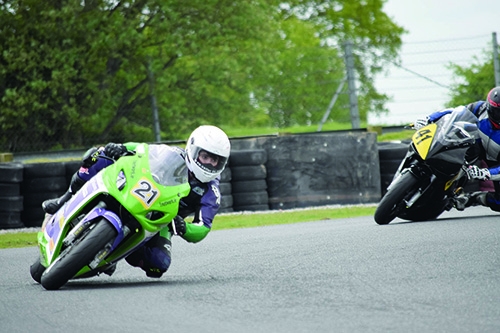 Lynch making her mark on Masters

MOTORCYCLE racer Nicole Lynch from Clondalkin is starting to gain some momentum in this year’s Adelaide Masters Series.

Riding bikes since she was four and racing since 2013 with numerous podium finishes and awards under her belt both as sidecar passenger and solo rider,  the 23-year-old competitor has, this season, been lining out Ireland’s most high profile motorcycle racing championship which is staged over five weekends from April to October.

In the latest stop on the series in Mondello Park, Lynch, despite starting from near the back of the field, finished up sixth in her second race, shaving some 1.5 seconds off her lap time.

“I was very happy with my performance in the second race and I am really focusing on improving my qualifying times and achieving more consistency in that area” said Lynch.

“A good qualifying time puts you nearer the top of the starting grid and basically gives you a better chance of a higher placing.”

“I’m on a brand new bike so there’s a lot to learn this year, but If I do well in Ireland, I want to race abroad either in the British or European Championships because they are much more competitive and offer a lot of opportunities to keep moving up through the ranks.”

Off track, Nicole works as a Montessori crèche assistant in Blanchardstown.

“It’s as opposite to bike racing as you can get, but I really love it” she said.

Nicole is no stranger to the sport as her family are steeped in it; her father Paddy raced in the early eighties, both her older brothers race and one of them, Dylan, has won the Sidecar Racing Irish Championship eight times.