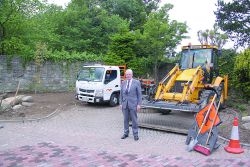 CONSTRUCTION works in Tallaght village continue to cause disruption for local businesses amid concern for local residents, with the state of the village being described as “very poor” by one local councillor.

With the annual festival Tallafest set to take place on August 15, Tallaght Community Council has also been calling on people to contact South Dublin County Council to request “to help get the village ready to shine” for the celebration of Tallaght.

Works on a 3km cycle route corridor between Tallaght and Templeogue have been taking place since March.
The work was expected to take 10 months to complete at the beginning of the project, but construction is still taking place in Tallaght Village four months later.
As previously reported in The Echo, the works have caused major disruption to businesses in Tallaght village, with one business manager calling the disruption an “absolute mess”.
Fianna Fáil councillor Charlie O’Connor told The Echo that he has been in constant contact with the council about the village.
Speaking to The Echo, Cllr O’Connor said: “I have had a lot of calls from constituents who are living in the village and passing through the area, and they are very concerned.
“It seems that once the work is done on one side, they dig it up again and the general state of the village is very poor.
“It’s a very serious problem that needs immediate action. I walk through the village every day and there are issues with graffiti, illegal advertising, the state of the footpaths and roadworks and it’s becoming a joke.
“In particular The Dancers’ Garden, as it is known, is in a sad state and we should be able to display a place we can be proud of.
“In the coming weeks we have thousands of people coming to Tallaght Village as part of Tallafest and it would be expected that everyone can enjoy themselves and be proud of Tallaght.”