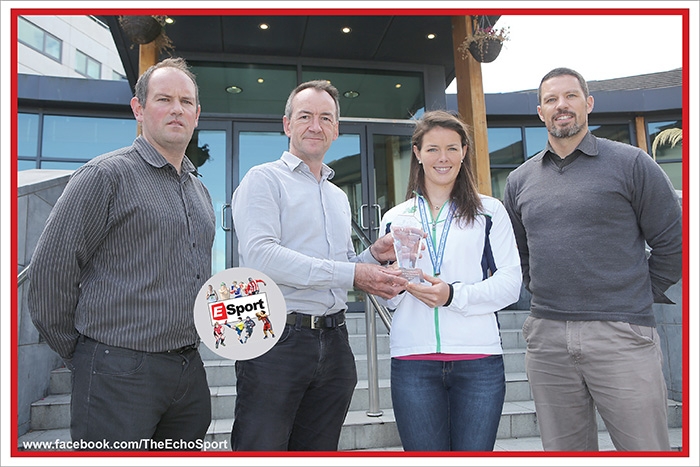 A FOURTH place finish at the European Games in the wake of her bronze medal win in the European Canoe Sprint Championships has seen Jenny Egan declared The Echo Sports Star for the Month of June.

The Lucan woman was the first competitor from these shores to ever make the podium at the European Canoe Sprint Championships when she came home third in the K1 5000m and she went very close to finishing among the medals again when she travelled to Baku for the European Games.

Silver medallist Lani Belcher of Great Britain was also less than a second ahead of her in 23:05.625 while winner Maryna Litvinchuk of Belarus was out on her own with a finishing time of 22:48.990.

It will be over the shorter 200m and 500m distances that Egan will be pushing for Olympic qualification when she heads to Milan in August for the World Championships.

FIRHOUSE Clover’s Saturday team have enjoyed a fine season after landing both the Lanigan and Noel Ryan Cups.

The Tallaght side has seen off some of the big names in junior soccer en route to these honours beating the Bluebell United in the Lanigan Cup decider and Crumlin United in the Ryan Cup Final just seven days later.

A penalty scored by man-of-the-match, Brian Malee, was enough to see the Firhouse clinch the former, winning 1-0.

It proved an even closer affair with Crumlin the following week as Firhouse won out 4-2 on penalties after the game had finished deadlocked at 1-1.

Firhouse drew first blood after 12 minutes when Darren O’Grady beat Michael Quinn from the edge of the area.

Crumlin restored parity ten minutes before the break when Graham Zambra ghosted across the edge of the box before firing past Dwayne Kavanagh with power and precision.

Extra time failed to break the deadlock and in the penalty shoot-out Kavanagh emerged the hero after he saved two spotkicks before David O’Keeffe fired home the winning penalty.