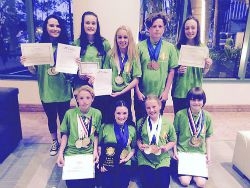 TALENTED Kids from across South Dublin impressed the crowd – as well as the judges – at the recent World Championships of Performing Arts.

Ireland was represented by 14 youngsters aged between 10 and 19 years old in Long Beach, California for the 2015 competition.
Once again the team performed extraordinarily well, winning awards in acting, modelling and dance categories.
Amongst the winners was Fair City star Niamh Quirke from Clondalkin, who picked up two full-time scholarships worth more than $20,000.

Niamh, who stars as Rachel Brennan in the Irish soap, won full scholarships to the New York Film Academy and New York Conservatory of Drama as well as one gold and three silver medals.
National Director of Team Ireland 2015, Maureen Ward, who runs the Talented Kids Performing Arts School and Agency was very proud of the team and thanked primary sponsor Certification Europe for the support.
She said: “The Irish team have just arrived back after having a hectic, exciting and full schedule for two weeks in Long Beach, Hollywood and even though we were one of the smallest teams here, we were a team of absolute quality.
“We have won multiple scholarships to New York Film Academy, to New York Conservatory of Drama and to Millennium Dance Complex, overall awards, Industry Awards, gazillions of medals and Susie Power, who used the stage name of Susie Shine, at the tender age of 11, has won the Overall Title of World Champion Actor.”
Susie, who is based in Walkinstown, performed a Dramatic Acting piece in front of an audience from over 60 countries and a panel of judges, before being crowned world champion.
Andrew Luke Feeney from Rathfarnham and Cameron Hogan from Walkinstown, both aged 15, impressed in the modelling category with a Dreamscope Talent Management and Agent offering to represent both of the boys in the USA.
Lucan’s Ariane O’Byrne was another recipient of the $10,000 scholarship for New York Conservatory of Drama for full-time training, while Katie Weir from Knocklyon received a 25 per cent scholarship to any Drama or Musical Theatre short-term course in New York Film Academy, as she picked up an Industry Award, a gold and two silver medals.
Walkinstown resident Lloyd Hogan won three bronze medals during the trip, with Emma Jane Weir from Knocklyon securing two silver and three bronze medals while Clondalkin’s Mia Quirke picked up three gold, a silver and an impressive six bronze medals.