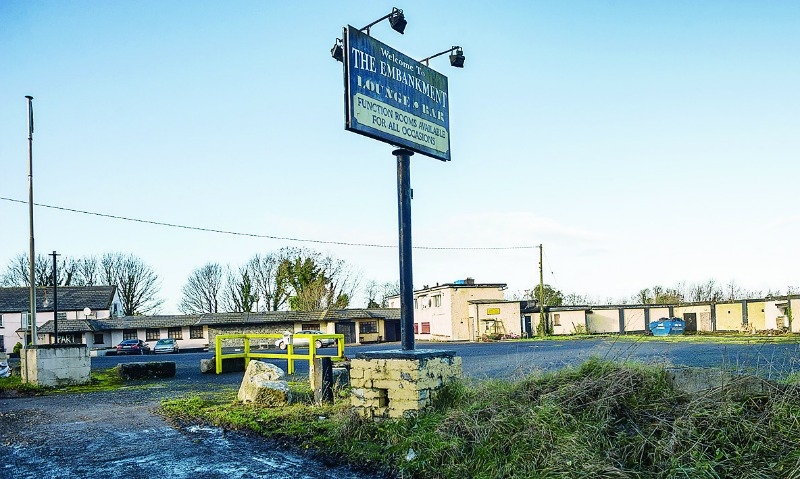 THE landmark Embankment pub on the Blessington Road could be swinging back into action if significant proposals to develop the site into a primary health care centre and ‘step-down’ facility gets passed by county planners.

Closed for more than two decades, The Embankment attracted music lovers from all over the city, who came in their droves to the then-isolated venue to hear some of the country’s top showbands and ballad musicians, such as The Dubliners, the Wolfe Tones, Neil Toibín and Planxty.

After The Embankment’s closure, planning permission was granted in the late nineties for a single-story public house, a restaurant, crèche, swimming pool and a three-level, 54-bedroom hotel with conference and banqueting facilities.

This development never saw the light of day, and in 2001, a company called Mardivale Ltd, which still owns the site, lodged a planning application for the redevelopment of the complex – which included a new public house and car park.

Despite proposals, no significant development has happened on the 2.8 hectare site – which is now located in a densely populated and well-serviced area on the Blessington Road.

The new application lodged with South Dublin County Council is for a substantial mixed-use development, which includes the demolition of the pub and the incomplete building on the east side of the site.

The demolition is to pave the way for the construction of a ‘step-down’ facility consisting of two three-storey buildings connected by a link corridor with two integrated retail units at ground-floor level, car-parking area for 51 vehicles and bicycle racks.

A ‘step-down’ facility provides support for people who need medical care or attention after leaving hospital.

The application also provides for the construction of a two-storey Primary Health Care Centre with an integrated pharmacy and 80-space car park.

The construction of a three-storey childcare facility is also contained in the plans, which will specialise in childcare and also include a children’s activity play centre.

A new footpath along the Boherboy/Saggart road is also proposed, with a new pedestrian entrance.

Medivale Ltd is run by the McGettigan family, who own the local Kingswood Hotel and McGettigan’s Cookhouse and Bar.

The council is expected to make a decision on the planning application by February 22.

View the full application on www.sdcc.ie