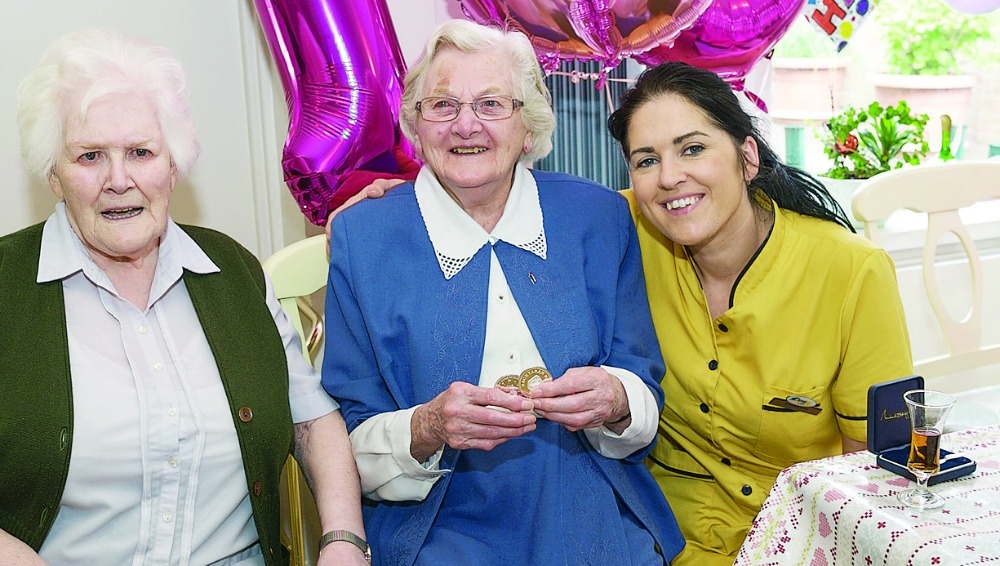 SHE may have celebrated the big 103 this week, but Maureen Hughes’s indomitable spirit has been praised as “inspirational” by staff at the Mayfield Nursing Home in Chapelizod.

“She has a lovely way of life, a real love of nature and God, always very positive and is an inspiration to us all,” said Michelle Cramp, Activities Co-ordinator Mayfield Nursing Home.

Maureen lived in Palmerstown from 1950 to 1986 prior to moving into one of Mayfield’s independent apartments.

She enjoyed a lively birthday celebration on Monday, which featured some of her favourite tipple, a wee drop of sherry.

“I do like sherry but not too often,” said Maureen.

“It was a wonderful day. Mayfield put on a wonderful celebration, we had some sherry, cake and then some wine for lunch. It’s lovely now and again.”

The only province Maureen has never settled in was Connacht, after been born in Belfast in 1914, her family moved to Dublin when she was just three months old as her father took up work in the city.

From there, Maureen spent time living in Killarney and Cork, where she did a degree in science and a diploma in education at University College Cork.

After marrying Francis Hughes in 1950, the couple relocated to Palmerstown.

“I wasn’t teaching for long after marrying but when my husband passed away in 1971, I was offered a job in the chemist methodology department in UCC,” she said.

An avid fan of classical music, walking, and literature (“I’d read anything” she laughs), Maureen is as independent today as she was in the late 1920s, so what is her secret?

“Perhaps it is a gift from God as was his plan evidently,” said Maureen.

“A specialist once said that moderation was key. I don’t think I did anything out of the ordinary. But it was very nice to get a cheque from the President for my 100th birthday, and every year since then I have received a medal.”