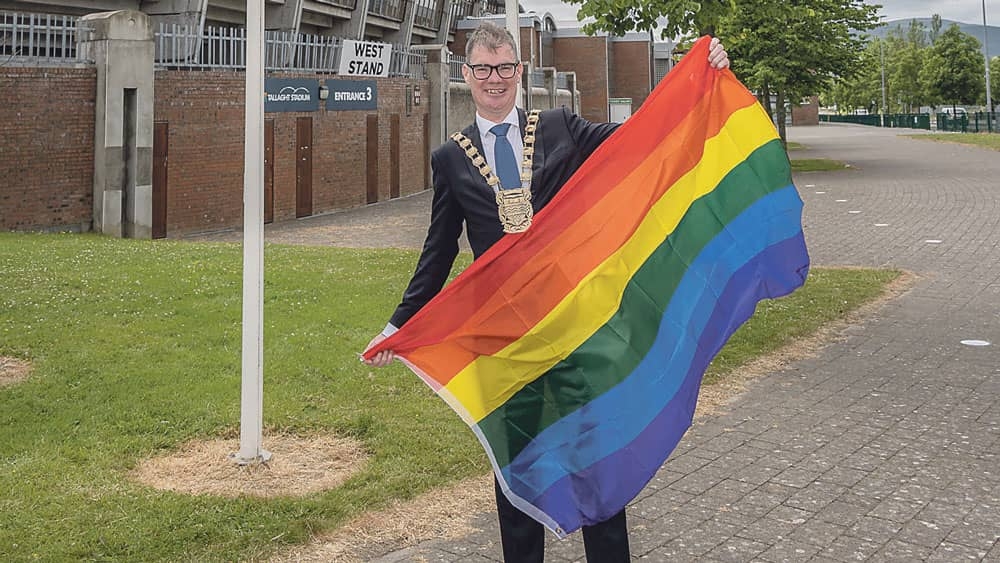 THE outgoing Mayor of South Dublin County Council, Cllr Ed O’Brien, said that he is proud to have “played a part in steering us through the pandemic”.

Mayor O’Brien’s tenure will end, as will Deputy Mayor David McManus’s tenure, when their council colleagues will elect a new mayor and deputy mayor on Friday.

Reflecting on what his experience of the past year has been like, Mayor O’Brien said: “It’s been a strange year, and I’ve been taken aback by the number of people who have approached me saying it must be a strange year to be mayor.

“But I’ve been very lucky to hold this position over a year as traumatic as this year has been. I’ve been front and centre assisting the citizens over the year in getting through the pandemic.

“It was a huge challenge, and it was one that kept me on my toes.”

The role presented some surprises for Mayor O’Brien, who hopes that he brought some changes to the role and challenged perceptions.

“I had no idea going into the mayor’s seat that I would be as involved in policy as I have been,” he told The Echo.

“It’s like your work as a councillor explodes but you have the ability to move things along more quickly.”

Mayor O’Brien added: “People think that the role is about photo opportunities and ribbon cutting, but there’s far more to it than that.

“I would hope, in the future, that people don’t see being the mayor as an opportunity to get out there and get their photo in The Echo every week.

“Over the past number of weeks, as the country’s been opening up, a lot of events have been happening – but I think these are secondary to the role of mayor.”

Over the course of a challenging year, Mayor O’Brien said there were two projects he worked on that he was particularly proud to be a part of during his time as Mayor.

“We started the roll out of communication boards around the county, which I’m very proud of because they’ll be of huge assistance to people with speech and language difficulties,” he explained.

He is also proud of a Pillar of Light event that he held in Tallaght Stadium last Thursday.

A light was shone into the night sky from the stadium, and the mayor invited people to watch the light from their houses and reflect on the past year.

“Given that my time as mayor will always be associated with Covid, I held the Pillar of Light in Tallaght Stadium,” he said.

“I’m very proud of the Pillar of Light, and I’m really happy that I got to shine that light so people could reflect on the past year and remember people they’ve lost.

“I’m proud that I played a part in steering us through the pandemic.”